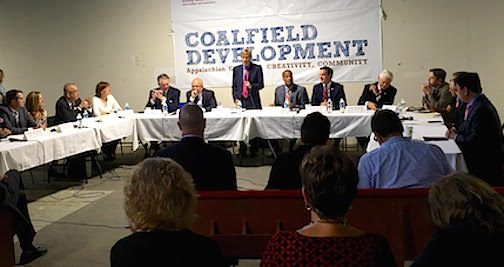 As part of the work of Shaping our Appalachian Region, grants totaling more than $12 million were announced for projects in Kentucky Wednesday.

With these investments, more than 400 jobs will be created in our region along with almost $40 million in economic impact and leveraged project funding.

Here’s a closer look at the grants:

— $2,750,000 ARC grant to the Eastern Kentucky Concentrated Employment Program (EKCEP) in Hazard for the TechHire Eastern Kentucky (TEKY) Initiative: Developing a Technology-Driven Workforce project. The project will serve young adults aged 17-29 who are out of school, and older adults who are unemployed, laid-off, or underemployed by offering several avenues to industry-led accelerated technology training, paid work-based internships, and employment opportunities in IT careers. This comprehensive workforce development program will train 200 new workers, create 160 jobs, and serve to bolster existing and emerging sectors that rely on a skilled information technology workforce in 23 Eastern Kentucky counties. The program will provide the trained workers necessary for a private technology company to expand its operations into Eastern Kentucky.

— $2,500,000 ARC grant to the University of Pikeville for the Kentucky College of Optometry (KYCO). EDA is also awarding $4,974,100 as part of this project. ARC funds will be used to purchase equipment, instructional supplies, and other materials to help launch a new College of Optometry. The college will both grow the healthcare workforce and improve access to vision care in Central Appalachia. KYCO will be only the second optometry college in the Appalachian Region, and will primarily serve Eastern Kentucky, Southern West Virginia, and Southwestern Virginia. Within the first three years of the award, KYCO will graduate 60 optometrists, provide care to 12,000 patients, and bring $26,000,000 in direct economic impact to the regional economy.

— $2,022,133 ARC grant to the Mountain Association for Community Economic Development (MACED) in Berea, KY for the Economic Transition for Eastern Kentucky (ETEK) Initiative. The ARC award will expand fast-track retraining and entrepreneurial technical assistance services targeted to dislocated coal workers; establish an intern program aimed at placing former coal workers in the energy efficiency sector; and increase access to capital through a $1,000,000 venture capital loan fund. The project will create 200 new jobs and 100 new enterprises, serve 500 existing businesses, and bring $12,000,000 in leveraged financing to a 54-county region in Eastern Kentucky.

— $1,464,251 ARC grant to the University of Kentucky Research Foundation in Lexington for the Downtown Revitalization in the Promise Zone project. The ARC award — partnering with the Community and Economic Development Initiative of Kentucky, the Foundation for Appalachian Kentucky, the Kentucky Promise Zone, Shaping Our Appalachian Region (SOAR), and the Kentucky Mainstreet Program – will help revitalize the downtowns of 8 distressed towns in the Southeastern Kentucky Promise Zone.

The project will provide each community with tailored economic studies that identify economic opportunities, support strategic planning sessions to capitalize on those oppor$tunities, provide financial support for key steps to implement those strategies, and build local leadership and business capacity. The project will create 24 new downtown businesses, 72 new jobs, and leverage $800,000 in private investment.

The Obama administration announced a total of $38.8 million in funding for 29 projects to help revitalize coal communities in Kentucky, West Virginia, Ohio, Pennsylvania, Virginia, Texas and Alabama that have been affected by its anti-coal policies aimed at thwarting climate change and other factors that have hurt the coal industry.

“These investments are going to make a difference in coal-impacted Appalachian communities,” ARC Federal Co-Chair Earl Gohl said in a conference call with journalists.

The grants will come from the Appalachian Regional Commission, the Department of Commerce’s Economic Development Administration and the Department of Labor’s Employment and Training Administration. They agencies project that the money will create 3,418 jobs and an additional $67 million leveraged through investments from other public and private partners.

Other major awards are:

— $2,500,000 in grants to the Bluewell Public Service District in Bluefield, W.Va., for improvement of the Mercer County Regional Airport.

— $2,285,049 EDA grant to the Upshur County Development Authority in Buckhannon, W.Va., for a center to help small businesses and provide broadband access.

— $2,196,450 ARC grant to the Consortium for Entrepreneurship Education in Charleston, W.Va., for “EntreEd K-14: Every Student, Every Year.”

— $2,000,000 ARC grant to Ohio University for “Leveraging Innovation Gateways and Hubs Toward Sustainability.”

Here’s a story from the regional perspective

Huntington, W.Va. — The Appalachian Regional Commission (ARC), the U.S. Economic Development Administration (EDA) and the U.S. Department of Labor’s Employment and Training Administration today announced a $38.8 million investment to grow the economy in the nation’s coal–impacted communities. These 29 awards were made as a part of the Obama Administration’s Partnerships for Opportunity and Workforce and Economic Revitalization (POWER) Initiative to stimulate economic growth and opportunity in communities that have historically relied on the coal economy for economic stability. With this announcement, communities and regions that have been negatively affected by changes in the coal economy are able to strengthen their economies and workforces.

“The projects and awards we are here to celebrate today help communities persevere and flourish as they deal with the challenges presented by the coal economy,” said Jay Williams, U.S. Assistant Secretary of Commerce for Economic Development. “POWER invests in jobs and workers, and develops and implements strategies and projects that can help transform these respective regions, states, and our nation.”

With these investments, over 3,400 jobs are anticipated to be created and/or retained in agriculture, technology, entrepreneurship, manufacturing, and other diverse sectors in Appalachia’s coal-impacted communities. These awards have also attracted an additional $66.9 million in leveraged investments from other public and private partners.

“Appalachian communities are actively engaged in creating diverse local economies that are resilient, sustainable and strong,” said ARC Federal Co-Chair Earl Gohl. “Local leaders and entrepreneurs will use these investments to develop, direct, and implement economic diversification initiatives which will have long-lasting impact.”

The POWER Initiative is a multi-agency effort aligning and targeting federal economic and workforce development resources to communities and workers that have been affected by job losses in coal mining, coal power plant operations, and coal-related supply chain industries due to the changing economics of America’s energy production. The POWER Initiative is part of President Obama’s POWER+ Plan, a broader set of investments in coal-impacted communities, workers, and coal technology proposed in the President’s FY 2017 budget. Today’s awards were granted from the $65.8 million in POWER funding announced by ARC and EDA in March, 2016.

A summary of today’s announced awards is available on the White House Web site.

Additional information about the POWER Initiative is available at www.arc.gov/power or www.eda.gov/power.

HARDIN WILL STAY IN OFFICE AS MAGOFFIN JUDGE/EXECUTIVE