How about some Asian carp for dinner?

How to filet Asian Carp 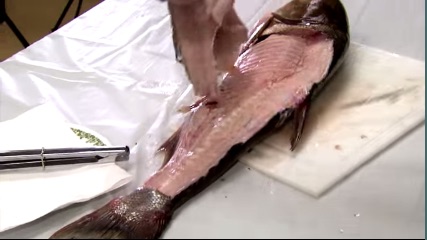 If you can’t beat invasive Asian carp, then eat it. Some Kentucky restaurants are banking on Asian carp dishes, and Indiana has begun a campaign to promote eating the fish in the Hoosier State. 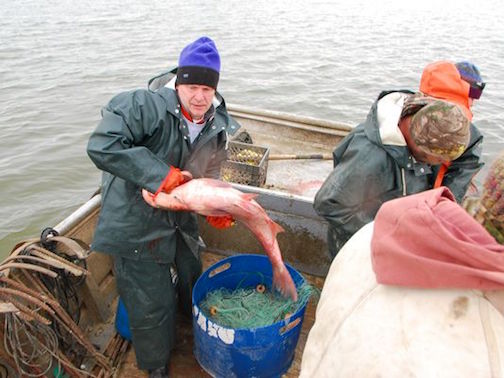 A Lexington, Ky., restaurant has begun serving Asian carp bought from a supplier in Paducah, Janet Patton reports for the Lexington Herald-Leader. Chef Kelly Probst, who said the carp are typically around 20 pounds but can be as large as 50 pounds, told Patton, “When we bring it to chefs, we say, ‘Get a knife; try it raw,’. And every time they say, ‘It’s so clean!’ … Chefs say it’s very versatile on the grill. As sashimi, raw, it’s very clean, with no muddy or fishy flavor. Pleasant on the palate. When you cook it, it’s very firm, almost tunalike, but with a nice flake. It cooks up extremely white. … Our only challenge is trying to get people to try it.” (Herald-Leader photo by Pablo Alcala: An Asian carp dish)

While Western Kentucky has an active fishery for Asian carp and processors who are selling it in China and the U.S., states farther upstream in the Mississippi River system are still trying to develop those tools to reduce the carp population, which can decimate the population of native fish. The Indiana Department of Natural Resources is trying to educate residents about the benefits of eating Asian carp, including posting a video (below) on how to filet and serve it, Barbara Brosher reports for Indiana Public Media. Andrew Bueltmann, a research biologist for the agency, “thinks if more people started eating the fish, there would be a reason for commercial fishermen to start harvesting Asian carp.” He told Brosher, “It’s kind of a developing thing where people are trying to get other people to eat them so there’s a demand for it. There’s no demand for it now so for commercial fishermen there’s really no point.”

Family asks for help in search of missing woman