Louisa Rotary had its weekly meeting on Thursday August 18.

She then introduced the weekly speaker, Allison Ball who is the Kentucky State Treasurer. 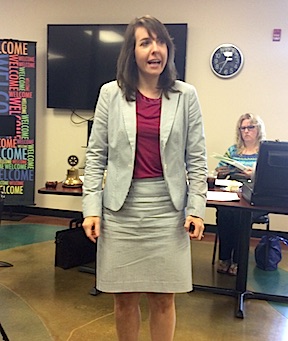 Allison Ball  is the 38th State Treasurer and the youngest statewide female elected official in the country. She is from Eastern Ky., a native of Floyd County.

Treasurer Ball began her speech with a story her father had shared with her to help gain perspective on whatever task is before her. She relayed that no matter what your job is, you should always look for your “essence,” your reason for being where you are.

She said she had used that when becoming the state treasurer, she knew her job was to be Kentucky’s  “watch dog over money.”

Mrs. Ball then spoke about leadership. Her important points were to “first find your calling, find your core, your essence”.

Always show value to the people around you. She gave examples of things that had happened in her office and how it makes a difference in the enthusiasm of her co-workers when she shows that they are valuable to her.

Another important quality of Leadership according to Allison is to “always be teachable!”

One last thing in closing was the importance of knowing what it is you believe in! Mrs. Ball shared that one of her favorite jobs included in being the State Treasurer was returning property back to the people it belongs to. Money and property goes unclaimed, and by going to her website, you can see if you are one of those people.

In closing she thanked the Rotarians for all they do for their community, and with that the meeting was adjourned for the week, with some members staying afterwards to plan for Septemberfest.

'CRUISE THE PLAZA' SCHEDULED FOR SEPTEMBER 3