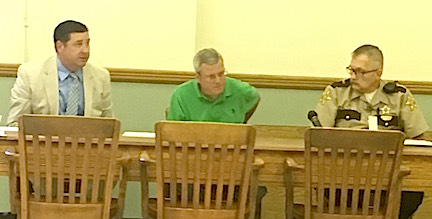 All were present and voted to approve the minutes and treasurer’s report.

A motion was made and approved unanimously by the members of court to pay for the Torchlight Water Project. The project at this time is 50% completed. They voted to pay up to $37,000.00 total, to be paid as the bills come in.

A motion for an ordinance to protect the county roads from heavy trucks greater than 18 tons was tabled for the next meeting.

The court members voted to approve dispursment of $1,000 to the Septemberfest.

A motion was made with the state’s approval to change the name of the road, “Stretch of old Rt. 23” to “Louisa Trace” on the recommendation of Eric Clevenger. The meeting was adjourned temporarily to go into executive session to discuss pending litigation.