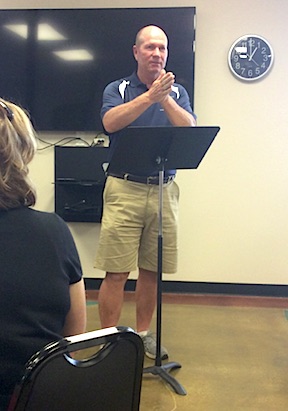 Thursday, August 11th Rotary held their weekly meeting at the First Baptist Church. The announcements mostly revolved around the auction last week. Feedback from President Lindsey Case was that the auction was a very successful one. “This is a win for the entire community,” Case said. “That money goes right back into projects and scholarships around our community.”

The speaker for the week was Gary Cox,  manager of the Big Sandy Regional Airport which is on the same insustrial site as the Federal Prison in Martin Co.

Cox spoke about the airport and meeting people from all 50 states and several different countries during his time at the growing facility. The airport landing strip is 5,000 feet long and 100 feet wide, large enough to land most of the largest aircraft. He said he loved his job and meeting all of the people that he had met over the years of working there.

Incidentally, the airport was recently awarded a $2.4 million grant to extend and repave the runway plus several other improvements in the project. to the more than 30 year old He went on to describe his main reason for speaking at the Rotary meeting.. A dream on his bucket list after watching a handful of boy scouts kayaking down Tug Fork when he was about 13. He told about how he had tried to do it in his 40’s, then again in his 50’s, but work and life just hadn’t allowed the trip.

Then last year, the year he was to turn 60, he described coming home with his boat and kayak and told his wife Roslynn about his intentions, and described the expression on her face when she realized he was serious.

He kayaked the entire state of Kentucky in 13 days. He spoke of one experience that stuck out to him through the entire excursion, one that connected him to Louisa. He stood at the point where the Tug River and the Levisa meet to make the Big Sandy River. Over the years, the water has chiseled it down to a point no wider than his kayak. He said he stood there and had a surreal feeling, a very spiritual one. Thinking about how the Indians had stood at that exact place, and the very first settlers of Louisa had stood there at one time. He challenged everyone to do the same as he closed. He carried a book with him that documented his entire journey and included dozens of pictures. He didn’t write the book to sell, which he could have  easily. He had the book made for his grandchildren.

In the end of his speech he announced that this year’s Airport Day would be held on August 20th. It’s a special day where they show off the airport. Everything is free except plane rides, which are $15.00 a person. He encouraged everyone to come out and join them.

With that the weekly meeting was adjourned as he passed around his books for the Rotarians to look at.