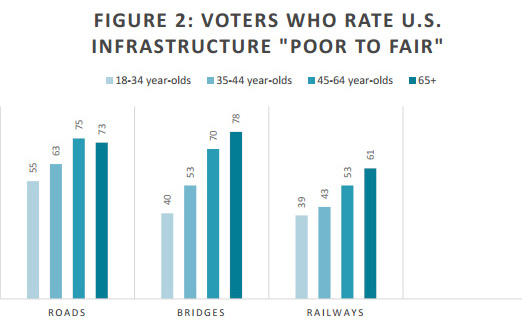 The survey of 2,000 registered voters found that 41 percent of Democrats and 53 percent of Republicans believe that U.S. infrastructure has gotten worse off in the last five years. The overall figure was 46 percent.

A 2014 report found that as much as one-third of rural roads in some states are in poor condition and many bridges are deficient. A 2015 Associated Press story said that some states have stopped repairing rural roads, in favor of bigger, costlier urban projects. (AEM graphic)

The poll found that older Americans tended to be more concerned with road conditions, Stephanie Kelly reports for Reuters. “Seventy-three percent of those 65 and older rated U.S. roads poor to fair, compared with 55 percent of 18-34 year-olds. When asked about innovation, millennials placed more importance on vertical farms for producing vegetables in urban areas, self-driving cars and drones, the report said. Older voters felt most strongly about ‘smarter infrastructure.'”