A Lawrenceburg woman remains behind bars after telling police that a “three-way went bad” July 31 at a residence on Lakeview Drive.

Courtney D. Chesser, 23, of 1072 Butler Drive, is charged with fourth-degree assault, second-degree disorderly conduct and alcohol intoxication in a public place following the incident early that morning, according to a police report filed in Anderson Circuit Court.

Chesser was “intoxicated and yelling loudly, causing neighbors to come out of their homes,” according to a report filed by officer Clay Crouch of the Lawrenceburg Police Department.

As he approached, Crouch said he could hear her down the street. When he went to the residence, Crouch said he was told those inside told Chesser to leave numerous times, but she refused and a physical altercation ensued, according to the report.

Chesser sustained unspecified injuries in the altercation, according to the report, which began as an argument over what she told him was a “three way” that resulted in a physical altercation.

Chesser was arraigned Aug. 1 in Anderson District Court, where she entered a plea of not guilty and was ordered held on a $2,500 surety bond. 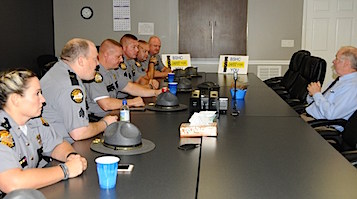 A local community health center is reaching out to help those who serve.

Officials from Kentucky State Police Post 9 in Pikeville gathered at the administrative offices of Big Sandy Health Care in Prestonsburg on Aug. 10 to learn about a program that will provide some free dental services to all sworn officers at the post.

“We’re providing certain dental services free for sworn officers,” Lewis said, noting he learned that the officers have health insurance for medical care, but many of them don’t have dental insurance.

“We live in troubling times for police officers and I’ve always been a strong supporter of police officers. I value what they do. They obviously play a critical role in our communities and we want to be partnered with them,” Lewis said.

BSHC operates five clinics in Floyd, Martin, Magoffin, Martin and Pike counties, and KSP Post 9 officers will receive some free dental care services at three of those locations: the Mud Creek Dental Clinic in Grethel, the Shelby Valley Dental Clinic in Pikeville and the Hope Family Dental Clinic in Salyersville.

Lewis explained that the program provides the opportunity for BSHC to “engage, invite and interact” with KSP. The program will be both beneficial for KSP, he explained, and for BSHC, as having KSP presence in clinics could deter issues.

“We’re doing it because we appreciate the work that you all do,” Lewis told KSP officials. “And also, we are very aware that having your presence in our clinics could be beneficial.”

He explained that when the clinic hires a new doctor, “drug seeking” patients will sign up to see that doctor in hopes of getting narcotics prescriptions. Sometimes, these individuals get “irate” and “threatening” when they learn they can’t get the drugs they seek. He said having troopers come in and out of BSHC facilities could deter some of those issues and, by providing services to the KSP, troopers will become familiar with the facilities and BSHC staff ,which may help if they are called to investigate an issue at one of the clinics.

“We can eat cookies now, since we have free dental care,” Sgt. Hicks joked.

Shearer, wife of Lt. Shearer, said the KSP holds a special place in her heart. She said her husband receives dental care through her insurance, but she understands that other troopers may not have dental care.

“I really do love you all and I’m so thankful for you,” she told them. “Whatever we can do to be a help to you all, we will do that.”

She and Lewis informed the KSP officials that they can also seek medical services at BSHC clinics.

Stapleton thanked BSHC for reaching out to help the post, saying that services from BSHC will be convenient because the clinics are located in every county served by the post. Post 9 employs 40 troopers, he said, 10 detectives and other sworn officers who lead special investigations.

Stapleton, who participated in the Blue Day for Blue Lights motorcade hosted by WMDJ in Martin last weekend, said he’s thankful to see community support like this.

“We’re seeing more and more the communities coming together and supporting law enforcement,” he said. “It’s a tough, tough time for everybody involved, but we’re going to continue to do the right thing and provide for our community. This is a people business, and a lot of times, when people see us, it’s at their worst time — it’s a car wreck or it’s a loved one who’s passed away. Things like this gives us the opportunity to present that we care about the community as well. They don’t always see that side, but I can understand that.”

The program announcement comes alongside several other community outreach programs BSHC is providing as part of National Community Health Center Week. Shearer reported BSHC clinics gave away “teacher survival kits” at schools near the clinics, care packages for fire departments, and other activities earlier in the week. Other activities, including a free car wash at the Physicians for Women Clinic in Auxier, clothing and pet donation drives and greeting card drive for soldiers are also planned.