Growing up in Louisa – Productive Fun!

Growing up in Louisa –Productive Fun!

One of life’s lessons I mused on when growing up was how to expose one’s children to practices that would encourage their development into men and women that are good citizens, socially literate, cultured, and having the tools needed for success in life. It is those things that entertain, entice, and distract us from making mistakes that would have negative effects. I’m referring to the old saying that ‘idle hands are the devil’s workshop.’ I know from my life that somehow rings true.

Therefore, with encouragement from wise parents, many kids become involved with sports. That is often a mainstay of a man’s life even long after he can no longer directly participate. Some kids become interested in music that depending upon talent and the time invested, can provide hours of enjoyment, whether as a performer or listener. There are those that discover the wonders of the written word that takes them on grand adventures in their imaginations. From such adventures rise today’s theme parks and computer games. They are disagreeable to us old folks, but in fairness they add skills, and knowledge and understanding of this diverse universe. Kids may develop skills in art, pottery, sewing, roller skating, billiards, or pinball. Many of these things occupied my time while growing up and kept me safe from many of man’s temptations, at least for a time. That delay in ‘growing up’ was beneficial for me. It allowed time for intellectual growth and a better perspective of what life might be. I started in a low position in the totem of life, so I needed that time.

I was around five years old when I was taken to Carter’s bridge where I caught my first ‘sunfish.’ I remember riding in the rumble seat of a model “A” with my mom and her friend sitting inside the car. The friend apparently owned or had borrowed the car, I suppose. It was the friend that showed me how to bait the hook and toss it out into the water. From the moment of the first tug, I was hooked. The first fish seemed to be so bright with its colorful orange gills. It was perfect, at least in my mind. In that small way I deemed myself successful and couldn’t wait to do it again.

As a young teen I fished a few times in Lick Creek and added other local venues from year to year. By the time I was twelve my mother had moved to Detroit, but I had remained behind to stay with my great grandmother and great aunt. On visits to Michigan I would go fishing with my step-father and mother in one northern lake and then another. I remember one in particular, in Pontiac, where the cold water in the glacier-carved pond was so clear I could watch the fish swimming between the grasses many feet below. The most prominent variety was the perch, which were elongated and had tiger stripes. The frigid waters also had large and smallmouth bass, and great northern pike with its several rows of needle-like teeth. I caught a few bullheads, a kind of catfish, and feared the day I would hook a musky. This variety, along with lake trout, were rumored to be up to six feet long. I wasn’t sure I was up to the fight and worried that I might end up in the water with the fish hauling me in.

Back in Louisa, I remember twice going up the point to a place called salt peter, which was an area on the Kentucky side of the Tug. I’m sure some of you readers would know the place. I am not at all sure where it got its name, but I know salt peter was an important ingredient for black powder, often used in the Kentucky Long rifle in both the revolutionary and civil wars. It was also rumored to be an ingredient that was added to our food during basic training with the purpose of reducing libido. If it did, I got over it. In my mind’s image of fishing there was some large concrete, or block structures that I had to climb upon. After doing so I tried my luck in the dark, rapid water of that river. The structure may have been a foundation for an old mill, pillars for a bridge long demolished, or a place for boats. I remember that the river was rapid and foreboding.

I had noticed that the waters of the Tug were always much darker than those of the Levisa fork. I had seen that at the end of the point just where the two rivers joined. One can easily see the difference and watch it mix. I was told sometime in the past that the Tug was darker because more coal mining was off that fork. It was thicker with coal dust and other effluents associated with mining. The second trip was with a few boys and a preacher, Charles something or other, who taught at the high school, too. My first trip out there was with Eddie Boggs and his sons, Johnny Bill and Nicky. They let me borrow a fly rod, but I used it with live bait since I knew nothing at that time about fly fishing. I would later watch Pete Armstrong fishing with a popper bug at the Wallace farm out toward Smokey Valley. It didn’t look hard so I figured that I could do that with a little practice.

I went in the LHS library and checked out a book on fly fishing. From the pictures and instructions I saw how it was done. Later, I bought one of my favorite books that still graces my bookshelves, “Lucas on Bass Fishing.” This had a section in which he debunked all the ideas that fly fishing was an aristocratic method known only to the few select. I saw that anyone could learn the techniques, so I made that a goal. Later, I would fly fish in Canada, in trout streams in the Ozarks, and in the mountains of Virginia.

A real treat happened when I was thirteen. My mother and stepfather took me to a week vacation on Lake of the Woods, Canada. Fishing was so good that they called into work and arranged for us to stay a second week. It was there that I caught a big northern pike. That was followed by more. When we got back to the dock we saw some 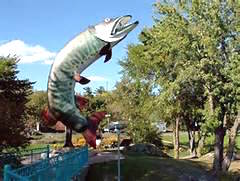 men holding up and photographing a huge lake trout they had caught. I also pulled in a smallmouth bass that I was told was the largest ever caught in the area. That trip we stayed in Kenora, Ontario, on a Sioux reservation. We saw a lot of wild life including bear and moose. It was there at the trading post that I bought a pair of moccasins. Once back in Louisa, I wore those nearly all the time until I wore through the deerskin.

I remember, (maybe told the story before) when Johnny Bill Boggs and I took a boat from the locks downriver to the mouth of the Blaine. We fished all the way down and then a very short way in the Blaine. On the way back we discovered that going upriver was slower than the trip down. We found ourselves in the dark the last half of the trip. There was no moon so we couldn’t tell where we were. Finally, we spotted a light sweeping across the water. From that we could make out the lock structures. Without the light it would have been likely we would strike one of the pillars and have a catastrophic incident. It turned out that the light was a lantern held by Johnny Bill’s dad and by Pete Armstrong. They were on a dock behind Pete’s house, so we were able to land safely. After the hugs from worried folks, Eddie grabbed his son and me and pulled us both to his station wagon. I would not soon forget the chewing out I got for putting Johnny Bill in danger. Well, that’s the way he framed it. Apparently he trusted me to not let his son get into trouble. Whoops.

We would fish the creeks all around over the next couple of years. After moving to Virginia with the Air Force I went on to join the new ‘Bass Masters’ organization and fish during my time off for several years. I was proud to field test lures and wear a vest loaded with patches, which made me look as if I was a really good fisherman. Actually, patches don’t really help all that much. I kept it up but stopped when the babies started showing up. I had to help my wife. I stopped golf at the same time, but that’s another story. My sons have grown up and for a time tried to get me to join them for fishing. I did a few times, but as I’ve grown older I don’t get in and out of boats very easily. I’ve stored my fishing gear away for good.

Looking back, the lessons I learned when winning and losing in baseball taught me about the challenges of life and how to handle victory and defeat. Music taught me to study, to practice, and to remember also to enjoy the fun. Both taught me teamwork and the value of diversity. Consider how many different kinds of ‘voices’ are used to make a symphony. Art and writing makes one have to slow down and appreciate how hard it is to turn out works of any quality. I often find it humbling and sometimes disheartening. But at least these things help us develop into who we are. At least we have the satisfaction that we tried.

Whether its golf, fishing, water skiing, martial arts, ballet, cooking or baking, there are these things that enrich life and help us through the tough times. Pottery, gardening, woodworking, working on old cars, or exploring the Superstitious Mountains for the lost Dutchman’s mine, or writing a mystery, researching ancestors, or turning out a wonderful new quilt, they are our way of answering the deep urges to add meaning to our lives and others around us. I remember from my youth one of the reoccurring conditions I hated most was boredom. Even today I read of teens and young adults who lament being bored and having nothing to do. Parents tend to suggest cleaning or some other kinds of ‘work,’ which is not what the poor child will find as preferred employment of their time. Sometimes we have to leave them alone or find sneaky ways to expose them to horseback riding, miniature golf, collecting old postcards, finding antique bottles, or metal detecting. Their lives will be richer for it. This is just a suggestion coupled with some memories. Take care, my friends.

P.S.  We’re celebrating the birth of grandchild #13!! Silas Michael Coburn was born on the 27th.