Growing up in Louisa –Tobacco!

Growing up in Louisa –Tobacco!

You cannot write an article like the ones demanded of this column without directly or indirectly contrasting ‘how it was’ to current circumstances. Today’s subject will be one that has changed from something that was almost romantic to something that is nearly forbidden. This week I shall feature tobacco, a product grown, sold, and used in Lawrence County, as well as most other parts of Kentucky. There wasn’t always a negative perception involving tobacco’s various uses throughout history, but for a little while marketing and peer pressure made it an acceptable, if not the ‘in thing’ to do.

To appreciate the evolution of this change I will touch lightly on some history. I learned in grade school that those dried leaves were one of two major cash crops supporting our fledgling economy during colonial times. After the pilgrims landed in America the native Indians introduced the product to the colonists, who in turn introduced it to Europe. At first it was for smoking in peace pipes and for sniffing.  (I expect the Native Americans killed more white men with tobacco than they ever did with arrows.) No doubt early users became hooked, and new users caused the demand to grow by leaps and bounds. Tobacco became the same as ‘cash’ as they used barrels of the stuff to pay passage, buy tea, or other commodities, or to even to pay the King’s taxes. 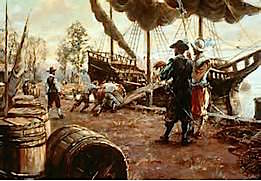 Evidence of early colonists smoking back in the day continue to be dug up by archeologists. Those long-stemmed, white clay pipes are found all around the early inhabited areas from that time. Colonial towns and plantations, both here and in Europe make good hunting grounds to find pieces of stem or pipe bowls. They find these artifacts up and down the coast and rivers, whether in England on the banks of the Thames, or around Boston, or the in mud of the James River in Virginia. I have seen a number of vintage paintings showing colonial longshoremen rolling casts (barrels) up planks onto merchant ships that were destined to sail with the precious cargo. These dried leaves were a major export, along with cotton. It took a lot to satisfy the growing demand overseas.

In the roaring twenties, and the years to follow, cigarettes were smoked by the actors and shown in the movies, newspapers, and magazine advertisements as the cool (Kool?) thing to do. Between the well-known and idealized actors of Hollywood and the advertising executives of New York’s Madison Avenue, the nation was totally bombarded with pictures of high society folks flashing gold cases, fancy lighters, and long cigarette holders. Everyone was ‘selling’ the idea that smoking was the ‘norm.’ Even our beloved President, FDR, was often seen puffing away on one of those stems for the newsreels, and General MacArthur seemed always to have his corncob pipe at the ready.

It was early in the twentieth century when the women of world publically took up the habit and lit up. Prior to that smoking had been seen as man’s territory. The ‘flappers’ of the roaring twenties rose up and began to smoke in the speakeasies, or wherever they darn-well pleased. The magazine and newspaper ads changed to reflect the importance of this new market. Out came the ladies own brands, such as ‘Virginia Slims’ to fit the trend. To smoke was save, dashing, refined, and oh so smooth! Absolutely ‘feline sleepwear!’ (Cat’s pajamas)

My great aunt, who was in college during the roaring twenties, smoked all her life and ended up paying the price. She died of cancer. In my youth, my mother took up the habit, and stopped, only to start again. When I was around thirteen I caught her lighting up and that really made me mad. She had promised to swear off. Now here she was smoking right in front of me proving that her willpower was insufficient and her word wasn’t to be trusted. In an act of rebellion I reached for the pack and lit one up, too. Sadly, she didn’t stop me. I didn’t really want to smoke, but I didn’t want her to, either. I was to continue smoking until the late nineteen seventies when I gave it up. 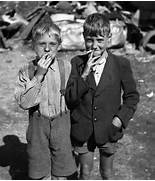 Lest I lead you astray with that side-bar, my first puff actually happened years earlier. I was on a trip with our church basketball team playing a game in Oil Springs, near Paintsville. During half-time some of the players slipped out a back door next to a creek and lit up. When they offered me a ‘toke’ I couldn’t take the peer pressure, so I took my turn. The result was that I became a sick boy. I was no good the whole second half of the game. Someone told me that I looked ‘green.’ I know I felt green. I was sick as that preverbal dog. That was nothing compared to the time when a big guy ran over me on the baseball field causing me to swallow a wad of chewing tobacco. Ewe! The result was that this was my first and last ‘chew. I know I turned a shade of ugly green this time.

I remember the commercials on early TV and the displays of the various brands in their places behind the counters of local stores. We all associated certain brands with the programs they sponsored. You know the “Hit Parade” was Lucky Strike (LSMFT). I think Jack Benny was Chesterfield. Boston Blackie was either “Sano” or “Encore.” The Camel commercials were very common, and I think help fund the news with John Camron Swazi. I remember that those dancing Chesterfield cigarette packs had nice legs. For years I smoked Pall Mall, but also some Raleigh. They had coupons that I collected but never were sent away for ‘prizes.’ Viceroy was a sponsor, as was Old Gold, but I don’t recall which programs.

I remember when pageboy Johnny showed up uniform in front of the Big Sandy News with his red MGA sports car. He was a real celebrity in our little town. He handed out little sample packs of Phillip Morris all around the crowd that gathered that day. Those packs only had three or four cigarettes in them, but when I left him I had ten or more of the sample boxes stuffed in my pockets. I once had a pack of Wings, but those weren’t around long. My aunt smoked Kent. Other brands that I remember include: Winston, Marlboro, Salem, Parliament, L&M, Viceroy, Champion, Tareyton, Fatima, Benson & Hedges, Alpine, Newport, and Kool. I likely missed your favorite, but it hurts my poor head to think too hard on such things.

For several years I also liked to smoke a pipe. The ones sold around town that I remember were Dr. Graybow and Medico. I had one that an Air Force pilot friend picked up for me in the Canary Islands, or in the Azores, that had a leather cover with meerschaum lining. Another was a favorite briar I had purchased from Ed Land’s, but the best smoking pipe was a corn-cobb that I used for years. I smoked Raleigh pipe tobacco, but also Carter Hall, Half & Half, Kentucky Club, Sugar Barrel, and several other aromatic blends. When I gave up smoking it was because of the birth of one of my sons. I didn’t want to inflict him with the damage that by that time I knew that smoking can bring. We were just learning about the harm that smoking caused. I threw away a carton of cigarettes and took my pipes to the woodshop where I cut them all in half. I haven’t smoked since. It’s been nearly forty years.

Smoking now is less popular than it was back in the day. We don’t even have an ash tray in our house and that is a signal that we really don’t want folks smoking inside. A few visitors would take a walk outside, but now most have stopped the habit. One of my cousins made a statement to me once that smoking was a tax on the poor. I’ve thought about that numerous times and see some wisdom in that analysis. It seem more poor people smoke than affluent ones. Maybe, given the price of a pack of cigarettes these days smoking will ensure they stay poor. 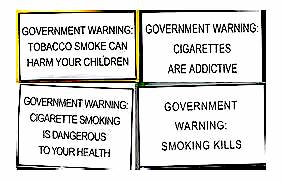 It was in 1964 that Luther L. Terry, M.D., Surgeon General of the US Public Health Service, presented a report that cigarette smoking was a major cause of lung cancer and other breathing disorders. This took the national news media by storm, making it a top news story. It was until Congress passed the Federal Cigarette Labeling and Advertising Act in 1965 that a required health label had to be placed on cigarette packs, including in advertising, and required issuance of an annual report on connected health issues. As a result a concentrated program aimed at reducing or eliminating smoking has been fairly successful. The numbers of people not smoking has increased in addition to millions dropping the habit. Even so, tobacco use continues, particularly among the poor and in other nations throughout the world.

I didn’t write this to preach, or to put down anyone stuck with the habit. I know it is addictive and a very tough practice to break once hooked.  We also know it is harmful, expensive, and unattractive. For me, it doesn’t make sense, but then I must admit that I was a once smoker. I cannot throw rocks, so to speak. In defense, others most certainly have a right to choose differently than me. My job in this column is to bring back memories. When I think back I still see those vintage displays of various brands, mostly out of business, the commercials I saw in my youth, the ‘zippo’ lighter displays, the pipes, floor-model ashtrays, and movies loaded with stars puffing away. Some readers likely had friends or family that grew the stuff and others that worked cutting the leaves and hanging in tobacco barns for drying and cure. Even if you have been blessed with a smokeless past, it must surely have touched nearly all of us in some way or another.

Tobacco markets continue to operate even as the products defend suits, settles, pays, and use the required warnings in their ads and packaging. This tells me that there is still profit in marketplace, even if little conscience in the boardrooms. It is still an important ‘cash crop’ for farmers, else they wouldn’t grow it. Tobacco auctions continue, even while it’s welcome in hotels and restaurants wanes. Stores, markets and gasoline stations still sell them, and kids still sneak a smoke when they can. Prohibition doesn’t work nor does tight governmental controls. The negative campaigns help, but it is the nature of man to rebel against losing their freedom to do as they wish, even when it is harmful. Such is life. Such is death. Still, hope exists in future generations.