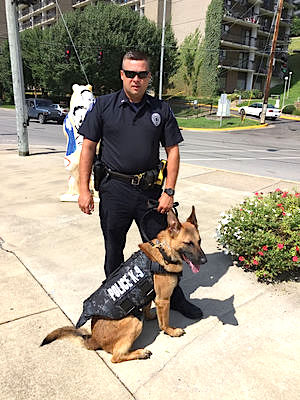 Pikeville Police Department’s K9 Yelo has received a bullet- and stab-protective vest thanks to a charitable donation from non-profit organization Vested Interest in K9s Inc.

Vested Interest in K9s, Inc. is a 501c (3) charity located in East Taunton, Massachusetts, whose mission is to provide bullet- and stab-protective vests and other assistance to dogs of law enforcement and related agencies throughout the United States. The non-profit was established in 2009 to assist law enforcement agencies with this potentially lifesaving body armor for their four-legged K9 officers.

Since its inception, Vested Interest in K9s has provided more than 1,900 protective vests in 49 states through private and corporate donations, at a cost of more than $1.7 million. All vests are custom made in the USA by Armor Express in Central Lake, Mich.

The program is open to dogs actively employed in the U.S. with law enforcement or related agencies who are certified and at least 20 months of age. New K9 graduates, as well as K9s with expired vests, are eligible to participate.

“No we don’t have one,” Fugitt said. “Our dog is a single purpose narcotics only dog. Most duel purpose, narcotics/apprehension dogs use those vests.”

The donation to provide one protective vest for a law enforcement K9 is $1,050. Each vest has a value between $1,795 and $2,234 and a five-year warranty, and an average weight of four to five pounds.

There are an estimated 30,000 law enforcement K9s throughout the United States. For more information or to learn about volunteer opportunities, please call 508-824-6978. Vested Interest in K9s, Inc. provides information, lists events, and accepts tax-deductible donations of any denomination at www.vik9s.org or mailed to P.O. Box 9 East Taunton, MA 02718.

All Clark County deputy sheriffs have better protection after getting new bulletproof vests, thanks to a grant from Kentucky Homeland Security. 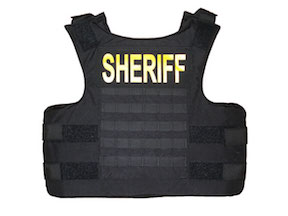 Clark County Sheriff Berl Perdue Jr. said his office received the $13,300 grant a couple months ago, which would be used to purchase 20 new vests for his regular deputies and active reserve deputies.

“Our vests had expired,” Perdue said. “They have a five-year life on them. Ours have been a little outdated, and it was time for an upgrade.”

Perdue supplemented the grant with about $4,000 in drug forfeiture money to purchase better, more comfortable vests. He said deputies wore the old vests under their uniform shirts and they were bulky, hot and often uncomfortable.

The new style is worn over the uniform shirt and looks like a formal uniform on the front. Deputies can easily remove the vests if they will be working in the office, Perdue said.

The change has made a difference.

“I have guys who were reluctant wearing vests now like them,” he said. “Everybody’s wearing them now.”

Perdue said he saw other departments using this style of vest and thought it would work for his deputies. They also offer increased protection, he said, which has become even more critical in the wake of recent attacks on police in Dallas and Baton Rouge.

“With what we’re going through, it’s crucial,” Perdue said.

“Anything can happen anywhere.”