Overcoming one obstacle after another and inspiring many along the way, Tina Jackson, a disability rights advocate from Louisa, has been inducted into the Self-Advocate Leadership Circle of the National Association of Councils on Developmental Disabilities. 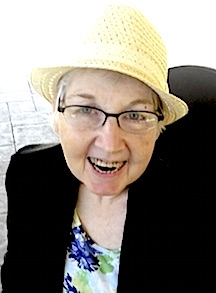 At 18 months old, Jackson was diagnosed with cerebral palsy and has overcome adversity with her determination that everyone deserves equality. She is an active advocate for herself and others throughout the state of Kentucky. The Self-Advocate Leadership Circle was established in 2014 to recognize those, such as Jackson, who show hard work and commitment to speak up for their rights and the rights of others with disabilities. Jackson was awarded this honor on June 16 at the National Association of Councils on Developmental Disabilities’ annual conference in Washington, D.C.

“I am extremely humbled and I know more people do what I have done,” Jackson, who cannot physically speak, said via text message to the Bowling Green Daily News. “I was born with a lot of life challenges and a lot of highs and lows. This induction makes me feel that the work I have done to overcome my challenges has mattered and been recognized and may help others not to give up.”

In previous years, the National Association of Councils on Developmental Disabilities sent applications to all 56 developmental disabilities councils asking if they were interested in submitting their top self-advocate for the Outstanding Self-Advocate Leader of the Year Award. Donna Meltzer, CEO of NAACD, said that they started the Self-Advocate Leadership Circle when they began receiving so many wonderful applicants for the award and wanted those people directly involved in their organization.

“We recognized that there was a wonderful group of people out there,” Meltzer said. “As a national organization that is all about promoting the full inclusion of people with intellectual and developmental disabilities, we believe very strongly in the fact that people with disabilities should be a part of everything that we do.”

Meltzer said there is no one particular set of responsibilities the members of the circle have, but what they have is an expectation to use their voice and better the organization. The circle was created to be an integrated part of the organization, not separate. Several members have served on the board of directors, the district planning committee and the annual conference planning committee. All members collaborated to work on a handbook called “The Art of Impact,” a reference for self-advocates, new and experienced. Meltzer said she looks forward to working with Jackson.

“I have every belief that if she was submitted by her council and all the great folks there who work with her, that she’ll be an outstanding advocate for us and a real asset to everything that we do,” Meltzer said.

“She has worked tirelessly for decades and has rarely been given recognition,” Underwood said. “She’s not the type of person who really seeks recognition, so it was really a pleasure to see that people were recognizing the value of her work.”

In the 1980s and ’90s, Jackson worked in the fields of social work and medical records. It was during this time, her physical condition became worse due to a series of seizures and strokes. For the past 30 years of her life, she has experienced tube feedings, the inability to physically speak and increasing visual issues.

Problems with eating and drinking brought about the invention of, a now patented, assistive device called The Jackson PEG Tube Stand, created by her husband, Mark Jackson. She now sells the device to assist others in regaining independence after having a percutaneous endoscopic gastronomy feeding tube put in place. Jackson said all she does could not be possible without the love and support of her husband.

“We work together and do for each other, but he has paid the higher price for my activism,” Jackson said. “Giving up his work to be with me. He has been and will be an essential part of everything I do.”

Through this next chapter as a member of the leadership circle and all of her activism, Jackson said it is important to her to be visible in the disabled community, especially to young people.

“I remember growing up and not seeing elderly disabled out being involved in the community,” Jackson said. “Now that I am 60, I want to be able to be that person young people can see as active and involved, even with my many limitations.”

Equality for everyone is important to Jackson, who has been active in women’s rights and racial equality as well. She said it’s important for every single person to speak up on equality, social justice and inclusion. One topic she said her energy will be directed toward is cuts to home care for the disabled.

“I am concerned about inclusion in our society,” Jackson said. “I am concerned about our country’s government and the proposed changes in care for the disabled. We have made many positive changes with the registry of caregivers and the ABLE Act, but much is left to do.”