How did Trump win nomination? 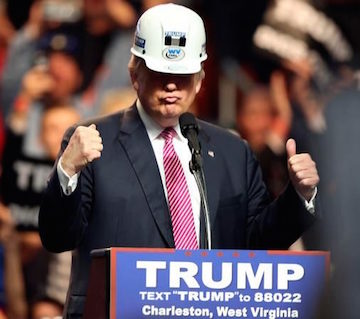 Donald Trump’s rise from businessman and reality television star to Republican nominee for president has been fueled by desperation in some parts of rural America, Claire Galofaro reports for The Associated Press. Lost jobs, high rates of poverty and drug abuse, and limited education in some areas led to anxiety and despair. “And desperate people, throughout history, have turned to tough-talking populists. And that is how, in one of America’s forgotten corners, the road was perfectly paved for the ascent of Trump.” (AP photo by Steve Helber)

Trump has been huge in Central Appalachia, winning “by spectacular margins all across the coalfields,” Galofaro writes. “From Appalachia to the Rust Belt to the hollowing manufacturing towns in the Midwest, Trump collected his most ardent supporters.” Trump, won big in areas like Logan County, West Virginia, where the unemployment rate is 11 percent—compared to 5 percent nationwide—and West Virginia is the nation’s only state “where less than half of working-aged people work.” Logan County resident Mike Kirk, who lost his home and his $28 per hour mining job, and now makes $11 in a pawn shop, told Galofaro, “He offers us hope and hope’s the one thing we have left.”

Peter Atwater, a consultant who studies the tides of consumer confidence, said “the average Republican is as pessimistic about the economy today as the day Lehman Brothers collapsed eight years ago,” Galofaro writes. “That perception of decline—that the country is careening in the wrong direction—can be as politically potent as watching your hometown wither, he said.” Some call those people “nostalgia voters.”

Daniel Cox, research director for the non-profit Public Religion Research Institute, “said an uneven recovery from the recession lined up with societal shifts—the election of the first non-white president, a rising minority population, the decreasing influence of Christian values,” Galofaro writes. “It left many in struggling, blue-collar communities across the country feeling deserted for the sake of progress someplace else.” He told Galofaro, “Today, we’re not interested in the plan, we’re interested in the slogan. When confidence falls, it’s all too complicated to understand an elaborate plan or an articulated policy. We don’t want to wait for the details; we don’t want to read the footnotes. Just give me a powerful headline.”

That’s something Trump excels at, Galofaro writes: “Trump promised to build the wall. Create jobs. Destroy ISIS. He blamed immigrants and China and Muslims for America’s woes. He stood on a stage in West Virginia, put on a hard hat and pantomimed shoveling coal. He promised to make them win again. His critics warn that his red-blooded, racially tinged rants threaten to unravel the very fabric of the nation. Here, the same words translate as truth-telling. His call caught fire so fervently that some are staking their families’ futures on whether he wins in November.” (Read more)