THE ROAD TO RIO: ALL ROADS LEAD HOME FOR BSCTC ALUM KENNY RICE

LEXINGTON, Ky. – Driving along Route 80 in Floyd County is the small community of Eastern, Ky. – no, not Eastern Kentucky. As you enter the unincorporated town there’s a sign “Home of Kenny Rice, National Sportscaster.” 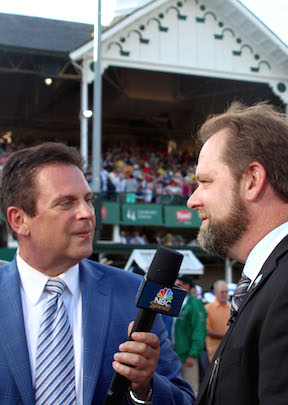 Kenny Rice is without a doubt the town’s most beloved native son.

“You never forget about your roots,” said Rice, 59, who know calls Lexington, Ky. Home. Rice will work his third Olympics for NBC Sports next month. “Some of my coworkers talk about being from a small town of a couple hundred thousand people. I always tell them I come from a town of 400 (people). I get a strange look, but I wouldn’t trade it for anything in the world.”

Rice described his community college experience as “some of the best times of my life.”

During high school, Rice got his shot – spinning records for WDOC-AM in Prestonsburg, Ky.

“Have you ever did something and you just know it is where you are supposed to be?” said Rice. “It was magical.”

“Back then, we would tape the games and play them back,” Rice recalled. “It doesn’t sound like a big deal in the world we live in now, but it was back in the day. It was a huge deal for the schools, the players and the community.”

From there, Rice didn’t realize it but his parents, Reginald and Edith, who both still live in Floyd County, gave him constructive criticism.

“They would record my games and would analyze my performance,” said Rice. “I remember my mom often telling me ‘Kenny, that just didn’t sound right.’ I think that is missing in this generation. Parents just don’t do that anymore.”

“There’s no event quite like the Olympics,” said Rice, who has worked many world-class events including 35 Kentucky Derby’s. “The whole world is watching.”

He will work boxing events during the Rio games next month. Rice admits working Olympic events is one of the pinnacles of his career.

Nervous? No. Anxious? Perhaps. But he always goes back home.

Asked if he thought he would ever work an Olympics, Rice said yes.

“I don’t mean this to be arrogant, but when I started calling games I approached it as a profession and I knew I wanted to work for a network,” Rice said. “I knew I could do it if I was dedicated and committed myself to learning and growing within the profession.”

After graduating from the University of Kentucky in 1980, Rice became sports director of WTVQ in Lexington, Ky. for two years before going to work for ESPN as a national freelancer in 1982. He’s been a sportscaster for NBC since 1999.

From Denzel to Bear Bryant… All roads lead home

Last year, Rice was working the Premier Boxing Championship on NBC in Las Vegas, Nev. He walked into the ring for an interview and Denzel Washington, who was in attendance, nodded at Rice.

“He nodded at me, I nodded back,” said Rice. “I wasn’t sure if he was familiar with my NBC work or heard I used to call the 15th Region championship game. I think that way sometimes to amuse myself right before something big. I’ve talked to Bob Baffert about small towns and close families, which he can relate to, and some off the wall story, two minutes before I am to interview on the Derby walkover. We’ve had some great laughs off camera.”

And those Floyd County connections has paid off for Rice. In 1981, Bear Bryant made his final trip to Lexington as coach of the Alabama Crimson Tide.

“It was a Friday and I was at the Holiday Inn on Newtown Pike in Lexington,” recalled Rice. “There were a large number of fans there, and the hotel notified us that the team’s flight had been delayed. There were other reporters there waiting, and they eventually left because they had to work high school football games that night.”

Rice stayed and landed the interview, with the help of name dropping Floyd County’s own Shorty Jamerson.

“Coach Bryant walks in and we are ready to roll and my camera man had left the camera battery on and it was dead,” said Rice. “I started talking to Coach Bryant about Shorty Jamerson, and he asked me if I knew Shorty. I said yes we are from the same community in Eastern Kentucky.”

Bryant began a conversation about Wilbur “Shorty” Jamerson and reminisced about his contributions to the University of Kentucky football team during Bryant’s tenure there. He scored both touchdowns in the 1951 Sugar Bowl win over Oklahoma in New Orleans, La., ending the Sooners’ undefeated season.

“By the time we got done talking, the camera man had retrieved another battery and Coach Bryant gave me the interview,” added Rice. “He gave me that interview because of Shorty Jamerson.”

Next month, all roads lead to Rio for the Olympics, but for Rice, all roads will always lead home to Eastern, Ky.

Lawrence Co. 10U beats Big Sandy in walk off fashion