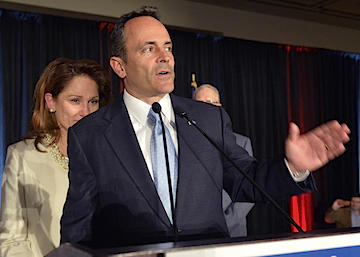 Kentucky ranks 47th among states for the percent of its population involved in the workforce, and that has hampered efforts to recruit businesses to the state, Bevin said.

Last year, Volvo had considered Kentucky for a new North American plant and had put the state in its top four choices, Bevin said. But the company chose South Carolina for its $500 million factory. Bevin said the company was concerned about getting enough trained and trainable employees, although he claimed that the company’s primary reservation was that Kentucky was not a “right to work” state that allows non-union employees to work in unionized workplaces.

Grants from the Work Ready Skills Initiative will be awarded to groups of educators and employers with plans to improve training for everyone, from high school students to the unemployed.

Bevin and Education and Workforce Development Secretary Hal Heiner said that a group of local educators and employers might propose building a new training center, or it might submit a proposal to buy new software and equipment so students are trained on what they will see in the workplace.

“We are way behind from a facility and equipment standpoint,” Heiner said after the news conference. “We don’t have the capacity to train enough people. The equipment around the state does not match what’s needed.”

The application period opens Thursday and lasts for 30 days. Projects will be awarded by a nine-member board led by Heiner and will include the secretaries of Labor and Economic Development, the chairman of the Kentucky Workforce Innovation Board, three people nominated by Bevin, and one each nominated by the House speaker and the Senate president.

Proposals must have at least a 10 percent match by local partners.

When asked how a financially troubled state could afford to issue $100 million in debt to pay for the program, Bevin said: “How can we not invest in our future?”

“We must work diligently to be more economically competitive and create more jobs,” Bevin said. “We intend to make Kentucky the manufacturing and logistical center of excellence in America. This will start with having the most highly skilled and well-trained workforce in the country.”

Heiner said the projects will expand on current training programs, mainly operated by the Kentucky Community and Technical College System through its certification programs.

Bevin emphasized that the choices won’t be based on politics or geography, but solely on the most deserving ideas.

“If we do not find worthy applications, we will not spend the money,” Bevin said.

At Lexington’s Bluegrass Community and Technical College, plenty of people are paying attention to the initiative.

“We are currently meeting with local employers to assess their workforce needs,” spokesman Mark Manuel said. “We have several capital project needs, but we want to make sure any project we submit will have the outcomes outlined by the governor.”

KCTCS president Jay Box said the system welcomes the initiative for “much-needed upgrades to the facilities and technology our colleges need to keep up with the demand for local workforce training.

“KCTCS is focused on improving the lives and employability of Kentuckians. Through additional business partnerships, we will build a better-prepared workforce to fill the jobs employers are so desperate to fill.”