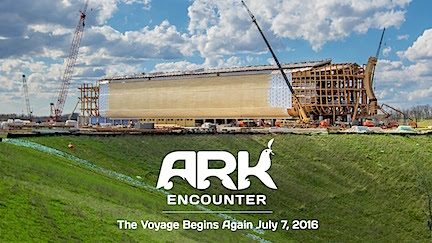 The barren Exit 154 off Interstate 75 in rural Northern Kentucky became a battleground in a war between science and religion.

At least that’s how many who came from around the country to Williamstown, Kentucky, saw it.

It’s at that exit where the creationist organization Answers in Genesis on Thursday opened a massive model of Noah’s Ark known as the Ark Encounter in Williamstown.

It’s also at that rural exit on Thursday you could see the head of the American Atheists argue theology with a creationist.

Answers in Genesis also built the Creation Museum a few miles north in Boone County. They interpret the Bible literally, believe the earth is 6,000 years old and mankind lived with dinosaurs. They built a 500-foot model of Noah’s Ark on a muddy pasture with a museum inside espousing their philosophy.

Dozens of atheists from around the country set up camp on a rocky patch of grass at the exit to greet patrons of the ark on its first day open to the public. Groups included the Tri-State Freethinkers and American Atheists.

A sign they put up proclaimed it the “Genocide and Incest Park,” referring to the story of Noah’s Ark. The protesters said the genocide is God killing all humanity and animals in the biblical flood story except for those on the Ark. The incest is then telling the survivors to be fruitful and multiply.

They incurred honks of support and prayers for their souls from cars driving by.

Protests greet Ark Encounter opening
This is the biggest single scene in the fight between science and religion, said David Silverman, head of the American Atheists.

“This is ground zero … for one man abusing the system to such an extent to promote it to other people’s children at taxpayer’s expense and at the expense of the reputation of Christianity itself,” Silverman said.

They waved signs calling the ark a “taxpayer flood of lies and hate.”

Standing on the ground, you could hear conversations that would sound absurd in other contexts. “When they found fresh blood in dinosaur bones …” one debate between a creationist and atheist went.

The head of Answers in Genesis, Ken Ham, made it clear at the ribbon cutting for the ark on Tuesday he felt his organization was under attack by the secular world. He’s described the ark as “one of the greatest Christian outreaches of this era.”

He defended the tax breaks. He said the Ark Encounter receiving tax rebates is no different than donations to churches being tax deductible. He said they deserve the same opportunity as other nonprofits. A federal court judge agreed and upheld the tax breaks.

He also defended their hiring practices. They’re a Christian organization and will hire Christians, he said.

“I can’t imagine Planned Parenthood employing someone like me in there,” Ham said. “Or I can’t think of the American Atheists hiring me.”

That didn’t dampen the protests. At 10 a.m., some creationists arrived with signs of their own to put on Exit 154. That’s when the scene got heated or interesting, depending on your perspective.

Eric Hovind, a creationist from Pensacola, Florida, and Jacob MacAuley, from the Raleigh-Durham area of North Carolina, placed signs among the protesters asking questions: “Why are you here?” and “Do you protest Zeus?”

Hovind founded creationist ministry Creation Today and MacAuley is the head of the Institute on the Constitution, which provides biblical interpretations on the U.S. Constitution.

They remained undaunted by the chanting from the atheists urging them to leave. Then they began debating beliefs.

“We just wanted to help correct them about the tax breaks and separation of church and state,” Hovind said. “I just let them know if you have an issue with church and state issues, let’s address it.”

It got heated between Hovind and Silverman of the American Atheists. The conversation ricocheted from incest to Adam and Eve, as atheists surrounding them encouraged Silverman.

“When God built the Tree of Knowledge of Good and Evil, he knew it would cause the fall of man, did he not?” Silverman asked.

Amid the shouting, Hovind managed a response.

Hovind, MacAuley and a small band of creationists remained on site throughout the day. He held a blade of grass in front Maria Allen and asked her where it came from. She replied she doesn’t know but believes science has the answer.

“We need our children to understand science,” Allen said. “We want our children to evolve and advance and we’re not going to do that if we’re stuck thinking that a Bible is God’s word and the Earth is 6,000 years old.”

What brought Allen from her home in New Albany, Indiana, was her objection to the Ark not hiring people from the lesbian, gay, bisexual, transgender community.

“I have a love for the LGBT community and feel it’s just wrong to discriminate,” Allen said. “I just think it’s time for people to stand up for what’s right. And this is just wrong. I think that money could have been used for a million different ways.”

The scene inside the ark itself was uneventful by contrast. People from all over the country were there. A quick survey of people filing in the bow of the ark found people from Seattle, Jacksonville and Texas. Tammy and Greg Jones and their six children traveled up from Jacksonville, Florida.

Many at the Ark barely took note of the protesters.

“I was surprised that they’re here,” Jones said. “Our job as Christians is to love them and to pray for them.”