Lawrence Co. 8U is District Runner-up in All Star Baseball 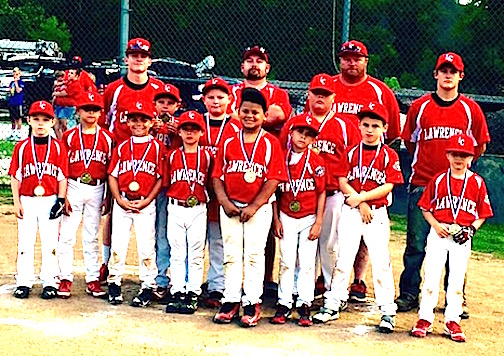 Inez, Ky. —  The Lawrence Co. 8U all-star baseball team traveled to Martin Co. recently to kickoff the all star season and came up a little short as the youngsters ran out of steam in the championship game of the District double elimination baseball tournament vs the Big Sandy all stars out of Pike Co. The LC all stars were playing their 9th game in six days and 5th in three days and were drained.

In the opening game of the tournament Lawrence Co. jumped all over Martin Co. from the get go and came away with a 14-6 victory. After a 30 minute break the stars took on Big Sandy and led 5-0 heading to the last inning and squandered the lead losing 6-5.

The very next night in the losers bracket it was a rematch vs Martin Co. with the Dawgs getting the victory 14-2 and setting up a rematch vs Big Sandy. This time around the LC all stars took care of business with a 6-4 victory to set up a winner take all championship game the next day.

Big Sandy came out from the first inning on and took down the Lawrence Co. all star team in the championship game.

Both teams will advance to the State Tournament which will be held in Cynthiana, Ky on July 13-17.