Growing up in Louisa – Fashions!

Growing up in Louisa – Fashions!

When I was a kid growing up in that quaint little town, my normal mode of dress was a well-worn pair of Levis, usually with one or both knees sticking out, an unbuttoned and untucked sport shirt showing my bare, boney chest, a dusty baseball cap, and a badly worn pair of tennis shoes. Being tall and very skinny, I must have looked like a slow moving, articulated scarecrow as I traversed the streets of town, usually kicking rocks or tin cans as I went.

Sundays, on the other hand, required a well-scrubbed change. Even before my teen years I had grown into the habit instilled by my mother and grandmother, to put on those good dress shoes, regardless of the discomfort and blisters they brought, a wool suite or sport coat that usually was short enough that my forearms were fully exposed to view. Once dressed, I would add my wrinkled and stained necktie that I normally kept waded up in the corner of my closet. I sometimes combed my hair but more likely than not my ‘crew cut’ saved me that chore, so a swipe of the hand would send any lint or debris flying. It was a rare day when I dressed other than these two extreme examples at least until late in my formal schooling when I noticed girls. It was then that I discovered that cleaning up mid-week was not only possible, but beneficial. I suspect many other people went through a similar metamorphoses, except for a few ‘dandies’ that were always in clean, dressy outfits.

In those days both men and women always wore their “Sunday Best” to church. An idea to consider is that when we wore our ‘good’ clothes on Sunday we were ‘good.’ But when we take it back to Saturday night we see a stark difference in dress and behavior. So it is justified that when we wear grubby clothes we therefore can act grubby? Hmmm.

Well, Sunday best meant that women needed a nice dress, a jacket, or stole, and a hat that was often covered with flowers, netting, and a hat pin to keep it in place. They were expected to have new shoes and a matching purse, and some white or matching gloves. They also wore slips, corsets or girdles and other ‘unmentionables’ or there would be clicking of the tongues when they passed by older women. For years I didn’t know what that was about. I didn’t see anything wrong. I’m betting very few even own one of those foundational garments today. 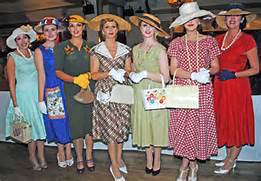 This was pretty much normal wear for ladies when attending church and fancy receptions throughout the year. I remember an aunt telling me she couldn’t go to church because she had no hat. I was young enough at the time that I had a picture in my mind that they would bar the doors or eject her if she showed up underdressed. So hats were considered proper attire in those days. Later I was to learn about, a scripture (1 Corinthians, Chapter 11) which pointed out head coverings as a serious requirement. This is the ‘rule’ that many Mennonite and Amish ladies follow by wearing their ‘coverings,’ and why Catholics apply scarves, even today.

The ladies in the larger cities where the big department stores had ‘tea rooms’ and featured ‘fashion shows,’ would never attend without donning white gloves and a fashionable hat. In fact, few ladies over twenty-five or so would wear anything out in public except dresses or skirts. The girls seemed always to wear dresses, or skirts with shells, except the younger ones that worn shorts, or ‘peddle-pushers,’ or jeans when not at school or church. Jeans were worn by the farm girls if they had early chores to do, or there was to be a special outing of some kind, but to go downtown like that was frowned upon. Usually the town kids wore dressier clothing to school, but for some, catching a bus after morning milking, made that level of cleanup impossible.

For men to dress up, they would put on suits if they could afford them, or sometimes sports coats and slacks. They also wore felt hats with brims that were the fashion of the day. Lapels and brims were wide for a time and then got very narrow. I remember ‘Dragnet’ where the suits worn by the detectives were very sleek and had very little narrow lapels. Only a few years later the lapels and neckties grew to nearly five inches. I recall seeing farmers going to ‘town’ wearing cleaned and pressed bibbed overalls, but they would also wear a tie, suit coat and a felt hat. Think of Biscoe Darling in the Andy Griffin Show. In those days baseball caps were for kids, or 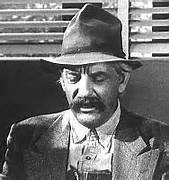 for wearing when plowing. Often men chose between a felt hat, (the good ones were real beaver) and straw ones for the summer. Some country folks wore cowboy hats, but that was usually to a dance or a bluegrass concert, and of course that rare rodeo, or cattle show.

For the most part men were more casual on weekdays when they stopped by the stores or barber shops. Sunday dress was always more formal and usually the best that one could afford. In a way, the quality of the outfit defined the status of the wearer. I never felt that much of a class distinction but certainly I’m sure that some felt inferior or embarrassed over dress.

The movies we saw down at the Garden Theater, and later on television, went from one extreme of dress to the other. As what we watched changed, so did America. For example, in the movies of the 30’s and 40’s men dressed in suites, often switching to ‘smoking jackets’ if they were at home enjoying some time reading or conversing with friends. They would dress for dinner, often wearing tuxedoes, or evening dress. I never saw that in person when growing up, but it was all over the big screen.

In my mine’s eye, in England, the gentry were pictured as well-dressed in their conservative wool tweeds, tartans, or dressed out in riding garb ready for the ‘hunt.’ It wasn’t long ago that an interview was aired on TV about a certain aristocrat that owned a grand manor house and estate. The aristocrat showed the viewers the beatifically appointed rooms that included portraits of his family for many generations. While showing the world audience around his estate he wore a nice camel-hair blazer, a wool sweater, and (would you believe?) blue jeans. I was taken aback by the concept that a member of aristocracy would be found alive in such casual garb as blue jeans! If he were on the street we wouldn’t be able to tell him from us commoners, for goodness sake. (So who’s the snob?)

Well, that goes to prove my point that fashions have changed. The stars in the entertainment industry don’t care if their outfits make any sense, or even if they are shaved and clean. A three day beard with a tux doesn’t make sense to me, but I guess I’m a fogy. The ladies dress, or undress, more to shock than to accentuate their good looks. There seems to be a contest on how close to total nudity one can go and not get arrested. If we agree with the adage that all publicity is good publicity, then we can expect more wardrobe malfunctions, I’m sure. As a young man I had to guess about such things, but sadly there’s no guessing today.

I have also seen photographs on the web showing how stupid-looking many shoppers turn out at Kmart. Their dress totally lacks any concern; indeed it seems to be a cry for attention. I’m immediately turned off and disgusted at these displays of people barely dressed, flaunting their blimp sized bodies, wearing the most amazing hair styles possible. It calls to mind the song that circulated a while back about not looking good naked any more. If I ever did, I don’t now, but I promise to help society by keeping that image secure.

Of course back in the day we had our mad fashions. Whether we talk about paper dresses, or poodle skirts, hot pants, zoot suits, sleeveless t-shirts, ducktail or flattop haircuts, and wavy or curly perms, we had our look. Some of us tried to look like Fonzie, or Elvis, while others were more like Pat Boone. The only constant with fashion was and still is, change. Bell bottoms were in during the twenties and then again in the late sixties, but now people are generally cleaner, if unshaven and very causal. It’s a way to try and look ‘natural,’ I guess.

Even the best dressed folks today are much more casual. We see outfits from golf shirts and slacks to jeans and t-shirts. There’s nothing wrong with casual, relaxed dress, but somewhere there needs to be a line that should never be crossed. I understand it is fashionable for male movie stars to have a three day beard, and to ignore ties even at the most important occasions, but I worry about what that says about how we feel about ourselves or what kind of model we are giving future generations. I know emergencies occur and we have to ‘come as you are’ when things suddenly pop up, but do we really have emergencies every day?

This isn’t really meant to say that we should become like the dandies of old, or try to out dress Adolphe Menjou (for those who remember the best dressed 40’s actor). It’s been a while since we donned a smoking jacket and slippers and wore a neck scarf and a diamond stick pin. Frankly, I doubt you could even buy such things this side of Park Avenue, or maybe in Hollywood. No retailers are getting rich selling that fancy stuff.

Movie stars aside, it was nice when girls wore pretty dresses. Today, there’s some that don’t own a dress. That’s a little sad, but not the end of the world. Girls look real nice in jeans, too, but I’m suggesting that it would be special if we acted as if we cared at least a little about how we appear to others. It’s okay to dress up now and again, and it’s okay to feel a special when we do. I’m for a relaxed and affordable mode of dress for most days, but maybe we should make consideration for the occasion. In looking presentable, we all win and the earth is beautified. What do you think?

Every Thought Captive -- Barnabas at Antioch: A Model for Bridge-People