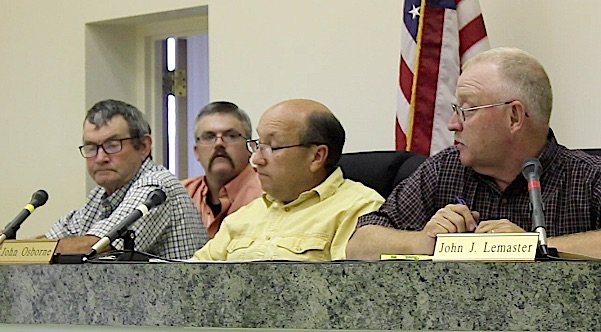 LOUISA, Ky. — Before Monday’s regular June Fiscal Court meeting County Treasurer Sabrina Cantrell advised that the fiscal court has received $400,000 less than expected in coal, gas and oil mineral taxes which will put a big dent in the county budget.

Cantrell said a special meeting was held on June 13th to work on the budget but said the county, as of now, does not plan any layoffs, benefit cuts or salary cuts to help make up for the low mineral tax receipts.

“I think they are going to cut back on work on roads and bridges and other county services and not have any layoffs,” Cantrell said. “What is carrying us through right now is the FEMA reimbursement money on the gravel.”

Magistrate John J. Lemaster said he has heard from some of his friends in the oil/gas industry that it is expected to pick back up soon. Former Lawrence County State Rep. Rocky Adkins said last year that millions of gallons of oil snd gas will be flowing from Lawrence County in the near future but new laws and regulations on fracking are hindering the progress since Adkins made that statement. 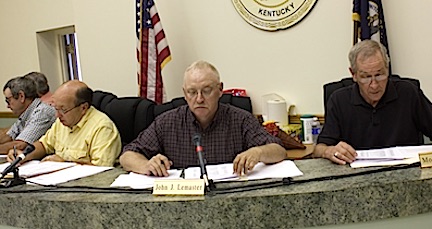 Osborne complained about the remaining mineral companies as well as loggers tearing up the roads as fast as the county can fix them.

“It’s mostly the ‘out of county’ operations that are hurting, they pay nearly nothing to the county to help maintain the roads they tear up,” he said.

Two of the county’s four magistrates are involved in the logging industry, Republican Earl Boggs and Democrat Morris Howard.

Hogan said in Monday’s meeting that the county can impose a bond on all trucks that would amount to enough to repair a county road if it was torn up by heavy trucks but no action was taken.

Cantrell noted in the special meeting minutes that there is more money going out than coming in and that the only item with funds still left in it is the forestry fund. County Clerk Chris Jobe said those monies cannot be used for any purpose except to pay the state for fire protection. “The state really needs to change that and allow counties to pay the money to local fire departments but I don’t see getting that done any time soon,” Jobe said.

Deputy Clerk Pam Taylor, who supplied the copy of the minutes of the spercial meeting said the jail fund also continues to be a drag on county monies. County Attorney Mike Hogan said he has attempted to have some of the costs reduced but has not been able to do so.

Hogan explained that the major problem is the time it takes to get a prisoner to trial and pointed at Commonwealth’s Attorny Anna Melvin’s office as the culprit.

“If we can get them (prisoners) processed through the system faster, it should cut down on the cost,” Hogan said in the minutes. 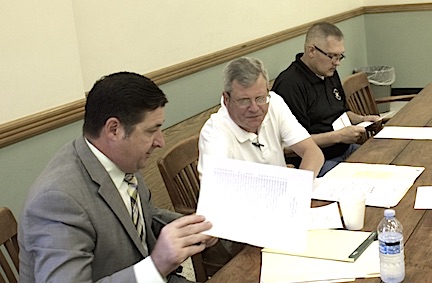 Judge John Osborne asked about why prisioners were taken to jail when a ticket would be just as good and Hogan said most of it is from the Louisa Police Dept.

“They said this is mainly because they have several new officers and it is good training for them to go ahead and take them to jail,” Osborne said.

Osborne then said the only place he sees to gain revenue is to cut or do away with paying for family plan health insurance for county employees. UPDATE: THE COUNTY’S COST FOR THE HEALTH BENEFITS IS $288,154. PER YEAR.

“A lot of counties are cutting health insurance all together,” Osborne said. “We may have to go that route too.”

Hogan said although he does not recommend it, the county could raise property tax rates and/or institute an occupational tax to boost the county’s bottom line.

“It would probably mean you would not get re-elected but you could go that route,” Hogan said.

No mention was made of layoffs or cutting salaries during the discussion.

In other business Monday the court:

* Approved the appointment of George Holbrook to the county Library Board.

* Awarded bids on gravel (mostly to Big Sandy Resources), oil, pipe and blacktop. (See list as soon as the clerk gets them ready for publication)

* Approved an agreement with the Commonwealth of Ky. KIA and Lawrence County Fiscal Court for $45,000 for improvement on Torchlight Road.

* Unanimously approved a $1,000 donation to the Tourism Commission for 4th of July celebration

* Discussed raising the motel/hotel tax from 3% to 4% but did not take any action pending a meeting between judge Osborne and the Louisa mayor to discuss joint agreement. Osborne also informed the court that a cabin rental business in Fallsburg owned by Bill and Wanda Cassady has not been paying the tax and say they are not going to. Hogan said they had to pay the tax like all the other rental places but Osborne said they have not paid in several months and refuse to do so. The action was tabled until next month’s meeting to give Hogan an opportunity to speak to the Cassadys about the tax payment.

* The court went into executive session to discuss litigation but returned to the meeting and announced that no action was taken. The litigation is presumed to the a potential million dollar lawsuit filed against the county, Sheriff Garrett Roberts and two of his deputies by Joesph Collins concerning the death of his father, Billy Collins at the Louisa Police department last year.

NOTICE OF ADOPTION OF BUDGET ORDINANCE

AN ORDINANCE Relating to the Annual Budget and Appropriations.

BE IT ORDAINED BY THE FISCAL COURT OF __LAWRENCE______ COUNTY,

SECTION ONE.  The following budget is adopted for the Fiscal Year _2016-2017_ and the amounts stated are appropriated for the purposes indicated.

All interested persons and organizations in Lawrence County are hereby notified that a copy of the county’s proposed budget in full is available for public inspection at the Office of the County Judge/Executive during normal business hours.