GOVERNOR AT ODDS WITH MAJOR UNIONS

Bevin, unions at impasse on workers’ comp panel; hearing next 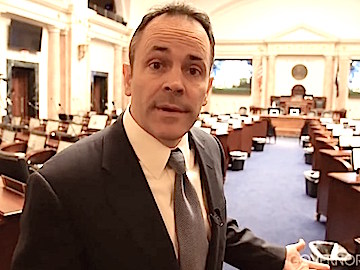 FRANKFORT – With opposing parties unable to reach an agreement on their own, a Kentucky judge said Monday he would schedule a hearing as soon as possible on the legality of Gov. Matt Bevin’s controversial reorganization of a state worker’s compensation panel.

At a status hearing Monday morning, Franklin Circuit Judge Phillip Shepherd said the hearing would be held June 22, July 11 or some date in between. He said he hoped to finalize the schedule within 24 hours.

Shepherd expressed disappointment that attorneys for the Republican governor and unions that have sued over Bevin’s executive order to change the Workers’ Compensation Nominating Commission could not work out an agreement.

The reorganized and newly named Workers’ Compensation Nominating Committee nominates to the governor Kentucky’s administrative law judges. Those judges decide whether and how much employers have to pay workers who are hurt on the job.

Last month — with an unprecedented six vacancies to fill — Bevin abolished the commission, rewrote the law that governed it and then re-created it with new members, all by executive order.

His order reorganizing the nominating panel was quickly challenged in court. Two labor unions and four injured workers sued Bevin, fearing that his new committee would nominate judges more likely to side with employers at the expense of workers.

Bevin last week signed two new executive orders regarding the panel. One rescinded all his previous changes to the Workers’ Compensation Nominating Commission and the other abolished the seven-member commission, gave it a new name and appointed five members.

The governor’s goal with the new orders was to address the concerns raised by Shepherd two weeks ago in his order to temporarily block Bevin’s initial executive order, which abolished the commission and then re-created it with new members.

The governor also wanted to allay concerns by labor unions that sued Bevin over his first executive order. Bevin’s latest action kept Charles E. McCoy of Owenton on the new panel, now called the Workers’ Compensation Nominating Committee. McCoy joined the Teamsters and AFL-CIO in their lawsuit against the governor.

Ched Jennings, attorney for the unions, told the judge Monday morning that the opposing parties could not reach an agreement as Shepherd had recommended and that he would like to have a hearing on the merits of the unions’ suit on July 11.

Chad Meredith, an attorney for Bevin, said the governor wanted an expedited hearing because there will be three more vacant administrative law judge positions on July 14. Currently, three of the 17 workers’ comp judge positions are vacant.

COOK MOVED FROM FALLSBURG PRINCIPAL POSITION TO ASSISTANT AT LCHS