LOUISA, Ky. — It was business as usual for the weekly Rotary Meeting on Thursday, June 16. As usual it began with a call for any special guests, today Josh McQuire was present, a candidate for State Representative. They immediately moved to talk about the Rotary Auction and announced that the dates of the auction would be held on 2nd, 3rd, and 4th of August. 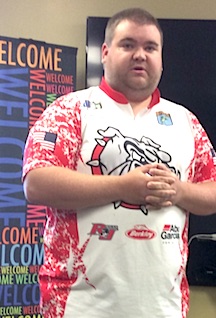 Next on the agenda was the introduction of Brandon Meddings, a teacher at LCHS for the last four years at LCHS and now is the proud coach of the “2016 State Championship Bass Fishing Team.” That was held at the Kentucky Dam Marina in Gilbertsville.

The two young men, Eric Price and Noah West who both played football, yet won a State Championship as freshmen in fishing, stood proudly holding their trophy answering several questions about the new sport in Lawrence Co. 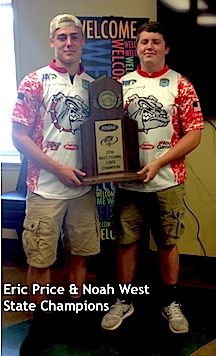 They told about their day of the competition and how they broke “2” records in this sport during the competition. The first record was the most weight caught at 34 lbs, and the second record was setting a new margin of Victory by 4lbs.

They also relayed that this is a co-ed sport though they don’t have any females on the team at this time, and that players are eligible to play from the 7th grade throughout their senior year because it is a non violent sport.

Meddings stated that many colleges are now getting “on board” with this sport by forming teams and giving scholarships.

Some of these colleges are Marshall, EKU, The University of Kentucky and Morehead in this area, while this has long been a sport that was more popular in central and western Kentucky.

Muhlenberg County won the last two years before they were met by our Eastern Kentucky fishermen. Congratulations to the LCHS Bass Fishing Team, and they are looking for new sponsors to help keep them on the water!

At this time the meeting adjourned for the week.

MSU REGENT SAYS COLLEGE MUST 'PULL TOGETHER' TO MAKE UP $1.4 MILLION DEFICIT