State official says if constables were eliminated, they wouldn’t be missed 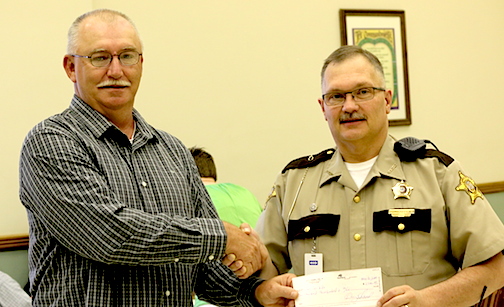 For years constables have been “running amok” in rural Kentucky, “armed with badges and guns but almost always with little or no formal training. They masquerade as qualified, legitimate police, but case after case shows that they often pose a threat to public safety,” R.G. Dunlop and John Boel of Louisville’s WAVE-TV report for the Kentucky Center for Investigative Reporting. “Some cruise around the county pulling drivers over or engaging in unnecessary and dangerous high-speed pursuits. Some use unauthorized blue lights. Others make questionable arrests that later collapse in court.

Many have faced criminal charges of their own,” including one who shot an unarmed man who was trying to surrender.

“Despite this history, the cycle of constable-initiated misdeeds continues unabated,” Dunlop and Boel write. “Because the office is enshrined in the state constitution, constables are responsible to no one except a small slice of a county’s voters every four years. And many voters don’t know what constables do.

Kentucky is one of 17 states that elect constables. Sixteen others, including West Virginia, have done away with the office altogether. The remaining states appoint them. Some states require training for constables. Others limit their authority to serving court papers.” 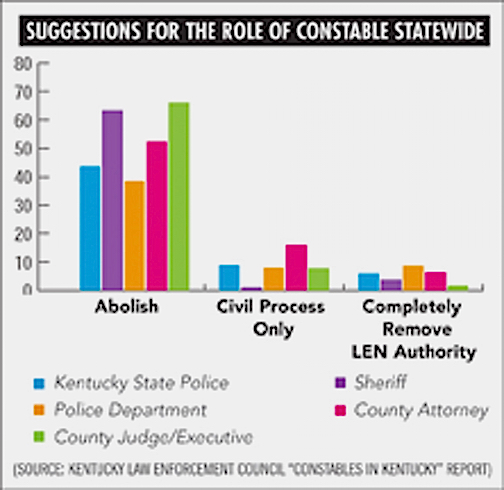 Former Kentucky State Police Commissioner Rodney Brewer, who retired in February after 34 years with the agency, told KyCIR, “If the office of constable was abolished tomorrow, and all of them were let go, the people of Kentucky would not miss a beat, they would not even know of their absence.”

The problem in Kentucky is that “from ex-cons to future felons, just about anyone can be a Kentucky constable,” Dunlop and Boel write. “A candidate for constable must be at least 24 years old, a resident of the state for two years and of the district for 12 months. Constables are elected in each of the state’s nearly 600 magisterial districts. Most Kentucky constables don’t receive a salary. Instead, they’re paid for serving various legal documents, such as warrants and subpoenas. . . . State law specifically exempts constables from the certification—and, thus, from the extensive training—that state and local police, deputy sheriffs and others must obtain.”