MOBILE HOME REIGNITES AFTER BEING PUT OUT BRIEFLY BY FIRE CREWS, DECLARED A TOTAL LOSS 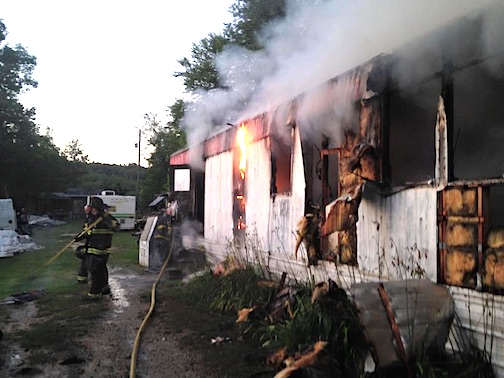 A fire that broke out at mobile home residence Wednesday evening near the Louisa area caused no injuries, but the home of the family that was living there was declared a complete loss. The firefighting operation was hampered due to problems of the rough terrain of the near-hilltop range where the home was located.

Shortly after 8 P.M., Lawrence County E-911 received a call of a report of a structure fire at a residence located on Route 1690 around one mile south of Louisa, in the area known as ‘the pumping station curve’, which is not far from the Three Mile Creek Road area. 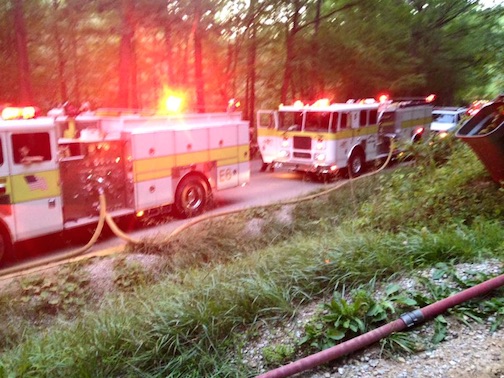 Upon their arrival Louisa fire crews made an unexpected discovery; the mobile home was located on near the top of a short but steep hillside range, and that the driveway road leading to the residence was going up in high angle zig-zag manner like a stairwell with sharp curves, thus, leading the firefighters unable to drive to the fire, even though the mobile home trailer was within a somewhat short walking distance.

Louisa fire official then made mutual assistance calls to both the Fort Gay Fire Department and also the Cherryville Fire Department, mainly because the necessity of the need for much more fire hose than Louisa fire fighters had,, so that they could get to join them all together to reach up the steep hillside terrain to the fire.

Firefighters from all three fire departments had to climb up about least 200 yards of steep embankment above Route 1690 to reach the smoldering blaze, where flames and smoke billowed from the mobile home, whose owner was identified as Russell Lemaster, who had lived at the roadside hill ridge spot residence he built and owned for about 20 years.

After about an hour the firefighting crews had the flames basically under control and extinguished for a short period, but later just after sundown the fire reignited, destroying what was left of the Lemaster mobile home. The residence was later 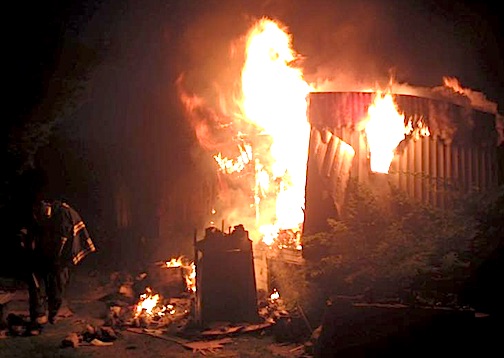 declared a total loss. There were no injuries among the all the firefighting teams involved in tackling the blaze, as well no injuries involving everyone who was living at the Lemaster residence.

The cause of the fire is unknown at this time. A state fire marshal is expected to arrive Thursday for an investigation at the ruin remains of the home.

The Lemaster family is being assisted by American Red Cross Serving Eastern Kentucky, who are helping the Lemasters cope with their loss with aid and comfort supplies.

After a quiet lull period in the previous past two to three weeks in the county that was devoid of any major emergencies, there has been a somewhat significant uptick of automobile and other vehicle accidents, some which resulted in individuals with various injuries; along with several fires, and other emergencies and alarm calls in the past few days in the Louisa area and throughout Lawrence County.