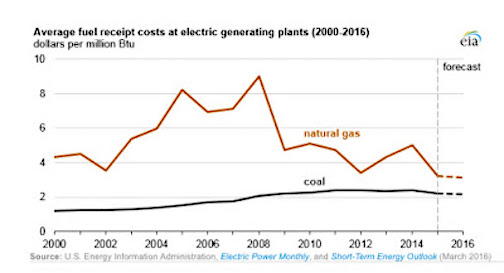 When a reporter last week in North Dakota pressed Trump “about how he planned to bring back coal jobs, he stressed that he would do so by getting rid of regulations,” Shogren writes. Trump said, “You know, all I can do is free up the coal, which I’m going to totally do. Get the companies back to work, market forces, that’s something I don’t want to get involved in. … To me, a market force is a beautiful force.”

Economists and energy experts say “easing regulations would not be enough to reinvigorate coal, especially not if Trump removes regulatory impediments to natural gas at the same time,” Shogren writes. “That’s because, so far, Obama-era regulations, such as the Mercury Air Toxics rule, have played a secondary role in coal’s precipitous downward trajectory.” (High Country News graphic)

Even coal industry CEO Robert Murray—whose company Murray Energy Corp. owns mines in Utah, Ohio, Illinois, Kentucky and West Virginia—says he explained this to Trump in a recent meeting with the candidate,” Shogren writes. Murray told Shogren, “He wants to bring the mines back and I told him that was not possible. I don’t think it will be a thriving industry ever again. … The coal mines cannot come back to where they were or anywhere near it.”

Luke Popovich, a spokesman for the National Mining Association, told Shogren, “I certainly would like to hear some details on what exactly a new president might do to undo regulations that are impacting coal, let alone what he might do in the marketplace to restore employment. I don’t think anyone is satisfied that he has a plan to achieve what he promises.” READ MORE