KENTUCKY COUNTIES GETTING THE SHAFT BY W.VA GOVERNOR CANDIDATE 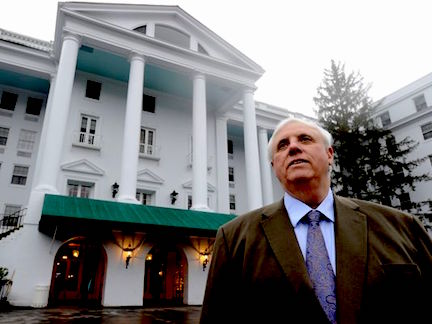 Some of his companies are also delinquent in property tax payments in at least two eastern Kentucky counties — $1.9 million in Knott County alone — already suffering economically from a crash of the coal industry, elected officials said.

State environmental regulators say they’re continuing to hold the oft-described larger-than-life owner of the glitzy Greenbrier Resort accountable, but the combination of tax debt and overdue reclamation obligations are creating a wake of frustration. 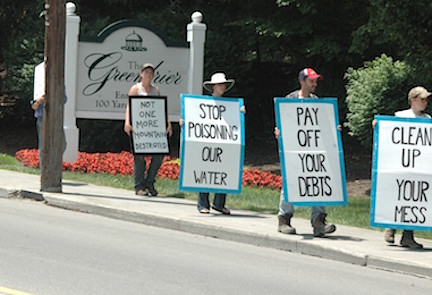 For his part, Justice said he’s been working hard to reclaim his Kentucky properties and said he’s committed to completing the job.

“We’ve continued to whittle away at all the reclamation,” bringing people back to work and removing eyesores, he said. “I told you before that any liability, any responsibility that I had I would take care of.”

He said he did not know about delinquent back taxes.

“If we’re behind on something we either think that we have a payment plan in place and are paying on that, or – if we don’t – we will do whatever is necessary to make sure that all obligations are taken care of. That’s what we do.”

Despite his wealth, however, Justice companies that were involved in one of the state’s largest mining enforcement actions in more than 15 years are accused in court documents of falling far behind restoration goals that were agreed upon in August 2014. Of 9 miles of surface mining highwall – that’s what is left after rock and coal have been blasted from the side of a mountain – that were supposed to be reclaimed by Sept. 1, barely over a half-mile has been completed, according to Kentucky regulators.

The Kentucky Energy and Environment Cabinet filings in Franklin Circuit Court show regulators appealed to Judge Thomas Wingate to press for more action in the waning days of the administration of former Gov. Steve Beshear. Wingate has put Justice’s companies on a regular schedule for reporting its progress.

The next status hearing is June 1.

Records in recent months show that cabinet attorneys have kept pressing for the company to make headway under the administration of Gov. Matt Bevin, expressing a renewed frustration at the slow pace.

The cabinet’s court filings earlier this year note that “unreclaimed highwall presents a severe risk of long-term environmental damage and a significant liability for the cabinet.” In March, cabinet lawyers argued that it was “apparent the defendants’ have essentially completed the easiest reclamation work first, with disregard to the priorities given by the cabinet.”

Cabinet officials characterize the Justice companies’ efforts over the last two months as being on track.

“The reclamation is ongoing and at this time, is in compliance with expectations,” said cabinet spokesman John Mura. “There has been a significant amount of highwall reduction towards the end goal of complete elimination on some of the larger sites.”

He said Justice’s companies are preparing a revised reclamation plan for state approval.

“This coal market and everything has been tough going for everybody,” Justice said. “But we’re still standing and … our stuff is getting taken care of and a lot of other people have fallen to the wayside, and there’s a lot of moonscape out there that is not ours.”

He added he could have “just bellied up the companies and walked away, but that’s not what we do.”

Justice’s attorneys have argued that the Sept. 1 deadline was flexible, and noted some equipment failures.

Cabinet lawyers disagreed, and told Wingate the cabinet has had “a long and frustrating history dealing with these defendants,” who breached the 2014 order seven times prior to last October.

“They’re not to where they committed to be, but they’re absolutely doing work every day, making progress,” said Tom Clarke, of the Virginia Conservation Legacy Fund. which is working as a consultant to Justice’s Kentucky reclamation efforts. “It’s becoming less of a problem day by day, but there’s still a lot of work that has to be done.” 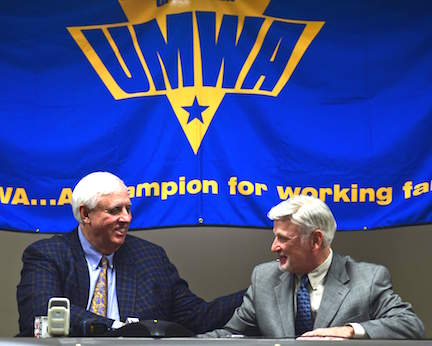 Justice’s net worth is estimated at nearly $1.6 billion by Forbes. His Greenbrier resort in White Sulphur Springs, W. Va. boasts to have “hosted golf royalty” including “Hogan, Snead, Palmer … Woods, Mickelson and many others!”

He has been a major political contributor to candidates of both political parties in Kentucky. And has a good chance at becoming the next governor of West Virginia, according to Dean Debnam, president of Public Policy Polling. “In Jim Justice,” he said, “Democrats have found a candidate who looks like he might be strong enough to at least keep the governor’s office in their hands.”

A May 20 Washington Post story reports that the “massive, 6-foot-7, white-haired” Justice has “left a trail of millions of dollars of unpaid fines to federal coal regulators, unpaid bills to suppliers and unpaid taxes to state and local governments throughout Appalachia.”

Lack of payments hurts schools and other public needs at a time when eastern Kentucky is suffering from huge job losses in the coal industry, Weinberg said. (READ MORE)