SALUTE TO VETERANS ON MEMORIAL DAY 2016

The most humbling experience you can have on Memorial Day weekend is not standing around a grill, or taking the boat out on the lake as I had initially thought. Who better to spend it with than the very men and women who have served our country, and seeing and hearing them remember the ones that weren’t fortunate enough to come home?

Today May 28th the annual Veteran’s Memorial Celebration was held at the Yatesville Marina, beautiful scenery to join together for such an important and touching cause. The celebration began with Rev. Katie Dilley and daughter, Liz Dilley Land singing the Star Spangled Banner, then the iconic 21 gun salute and Taps. 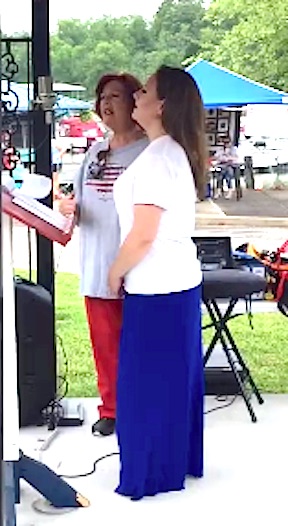 After that, everyone joined around the food table and began eating, telling stories, visiting among people who haven’t seen one another in a while, and getting to know people that fought for our freedom that we had never met. I enjoyed eating and listening to stories of things I could only relate to by the movies that I’ve watched on tv, trying to relate the horrors some of these men encountered.

The Charlie Fyffe Band played as the event went on and people talked and listened, I couldn’t help thinking of my own father who was drafted as an 18 year old boy from Webbville, Ky. If you know anything about this area, you know that it’s considered the “boonies” They took him to a foreign land, dropped him off and he was a front line sniper. The things these men are exposed to are something most of us will never understand. Although he does NOT talk about it, and we were taught not to ask, I am positive that it haunts him to this day. When soldiers come back in a casket, or missing limbs.. we are able to sympathize. We don’t see the scars in their hearts and minds. In my case it changed that young country boy, to a man that no longer looked at the world in a positive way. It changed everything about him, affecting every aspect of his life. It robbed us of knowing the man he would have been. In a sense, it changed an entire family.

The entire event was incredible. It was an honor to meet each and every one of the people who attended and we are the first to get the news.. Next year will be an even bigger celebration. Veterans official Martin Hay said that “If everything goes as planned, next year it will be held at the Lawrence County Park, and it will be a huge bash!”

This year the Veteran’s did something typical of selflessness. They left their own ceremony to attend and show respect to a fellow Veteran in Fallsburg. Half went to the funeral service, and half stayed to carry on. I am eternally grateful for being able to attend and write about “REAL LIFE HEROES”

There were a 2 men that left before I got their names for the group picture. If you don’t mind. Please comment on the bottom or get in touch with myself or Mark Grayson so that I can add you. Please and Thank you. Call 638-0123 or email markgrayson@me.com.