KY. ATTRACTION HAS BEEN TOURIST DESTINATION FOR OVER 200 YEARS 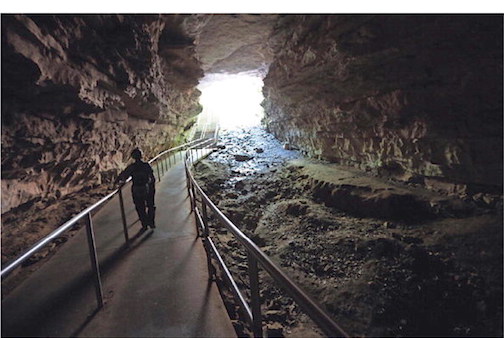 Described as “grand, gloomy and peculiar” by a 19th Cen­tury guide, Kentucky’s Mammoth Cave — the world’s longest — is helping mark the National Park Ser­vice’s 100th birthday this year. But it’s been home to cave tours for twice as long.

Tours began a few years after its use as a saltpeter mine, around the time of the War of 1812. Locals began guiding visitors into the giant lime­stone caverns, and in the 1840s, slave and guide Stephen Bishop was one of the first to map parts of the cave. Word of the cave continued to spread.

“Two hundred years ago, the guides were enslaved people, and women went in long dresses carry­ing a candle or whale-oil lanterns,” said Mammoth Cave National Park Superintendent Sarah Craighead. “Mammoth Cave has been a tourist attraction well before it was a Na­tional Park.”

As more than 400 National Parks, recreation areas and monuments mark the centennial of the park ser­vice this summer, Mammoth Cave National Park is also celebrating its 75th year of its founding in 1941 and the 200th anniversary of cave tours.

Coinciding with that is a nearly $6 million trail building project in what’s known as the historic section of the cave, a two-mile stretch whose potholed, uneven dirt trails haven’t been updated since they were built by the Civilian Conservation Corps in the 1930s.

It marks the biggest cave improvement project at Mammoth in more than 80 years, officials said. Work is at the halfway point — now suspended during the busy summer season — and will continue in the fall to add concrete and hexagonal pavers.

Just getting the materials in the cave is a feat: Pallets of sand, gravel, concrete and nearly 10,000, 40-pound pavers must be lowered by crane through an old airshaft and hand-carted through the cave. Work crews have to string lighting and power into deep recesses.

“It’s been a huge undertaking,” said park spokeswoman Vicki Carson, who said the park is working closely with archaeologists to ensure artifacts, such as mining timbers or Native American cane reeds, sandals and gourds are preserved.

Other work in the park includes a recent renovation of its cabins and motor lodge, and fixing an elevator into the cave that hasn’t worked since 2003 for disabled visitors.

All the work will enhance many of the 14 types of cave tours offered currently at Mammoth, from hours-long “wild cave” adventures that require crawling through rocky passages to easy walks in the larger sections of the cave. They all snake through miles of areas with names like Frozen Niagara,Gothic Avenue and River Styx.

Joe Rau, 70, a retired college professor from Atlanta, earlier this year took a two-hour “domes and dripstones” tour for the first time — fulfilling a longtime dream to visit the cave after seeing an ad in the back of a comic book when he was a child.

“I don’t know what it is, caves are just fascinating,” he said.

Exploration of the cave continues, and its true size remains unknown. In 1972, a connection between Flint Ridge and Mammoth Cave made it the longest mapped cave in the world at 144 miles. Since then, the system’s length has been mapped at 405 miles.

At the same time, park officials say the park has been drawing increasing numbers to its “surface” attractions on 52,000 acres of reclaimed hardwood forest. The area was designated an International Biosphere Reserve in 1990.

That includes 31 miles of canoeing and kayaking on the Green and Nolin rivers, 85 miles of trails — including 60 miles for horses and 25 miles for bikes — along with camping and picnicking. Along with the cave, those attractions helped draw 566,895 annual visitors in 2015.

That may be a result of increasing adventure tourism across Kentucky.

“In the last decade or so, the interest in those above ground activities have really increased,” Craighead said.

A recent National Park Service report found visitors to national parks and sites in Kentucky spent $113 million in the state in 2015. That spending resulted in 1,784 jobs and had a cumulative benefit to the state economy of $145 million. The biggest draw remains Mammoth Cave and its underground tours.

“The underground world is foreign to people,” Craighead said, “for many people it’s still a surreal, magical experience as it was 200 years ago.”