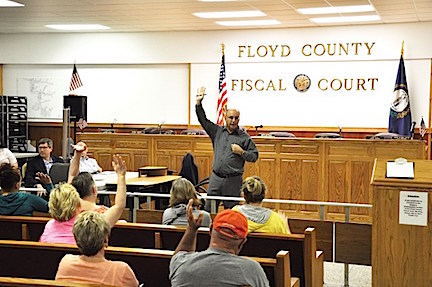 On Wednesday, Prestonsburg attorney Ned Pillersdorf invoked President Franklin Roosevelt as he convened a meeting of class members who are party to several lawsuits pending in courts around the region.

“Today is a day which will live in infamy,” Pillersdorf said. “It was today one year ago that these (Social Security disability) letters got sent out.”

Pillersdorf has routinely said he feels Roosevelt, who helped establish Social Security, “would be appalled” to see its actions today.

The letters informed nearly 1,500 in Kentucky and surrounding states that, as former clients of Eric C. Conn whose cases were suspected of possible fraud because of alleged collusion with Administrative Law Judge David Daugherty, their benefits would be terminated. After two suicides and an appeal from U.S. Representative Hal Rogers, the benefits were restored, but were still subject to redetermination hearings.

To date, with over 80 percent of these hearings already conducted, Pillersdorf said over half have been found “unfavorable,” meaning these individuals’ benefits have again been cut off and they have been, or will be, asked to repay their past benefits, amounts often over $100,000.

Pillersdorf called the meeting because, next week, a U.S. District Court in Huntington, West Virginia, will hold a preliminary injunction hearing in a class action case there. Pillersdorf said unlike the lawsuit filed in Pikeville, which was largely dismissed because it was filed before hearings took place and no damages had occurred, this suit was filed after its representative plaintiff Kevin Robertson “ran the gauntlet” of an unfavorable hearing and appeal.

The thrust of the legal argument, Pillersdorf said, is that the statute that permits the Social Security Administration to conduct such redetermination hearings stipulates it must do so “immediately” upon suspicion of fraud — and these letters went out in 2015, eight years after SSA employees began suspecting Conn and Daugherty, and four years after the first lawsuit was filed in the matter.

That passage of time, Pillersdorf said, has not only violated the statute, but resulted in some uniquely unfair hearings. Medical records, many of which he said Conn never bothered to submit to the SSA, have been lost or destroyed. One client’s doctor’s office had experienced a flood that destroyed evidence. Others have doctors who are now deceased or no longer in practice.
Pillersdorf and other lawyers, including Charleston attorney Bren Pomponio, met with clients after the meeting hoping to find suitable witnesses to testify in the case next week. Their goal, an injunction, would put the brakes on the entire redetermination process.

Every lawyer there urged those going through the process to find a lawyer to represent them, to immediately appeal unfavorable decisions first to the SSA Appeals Council and, subsequently, to their local U.S. District Court, and to file waivers for repayment. The Appalachian Regional Defense Fund can be reached at, (606) 886-9876, or found at, ardfky.org.