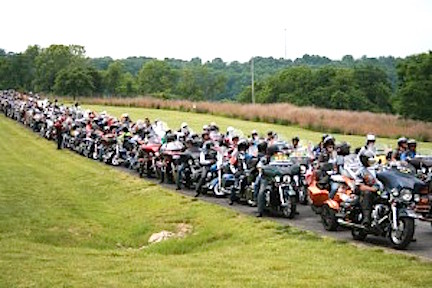 Early Wednesday afternoon, the gentle hum of a motorcycle sounded off near Frankfort’s Kentucky Vietnam Veterans Memorial on Coffee Tree Road as hundreds of bikers filled the area.

The crowd was assembled for one purpose, to show its appreciation for those that served in the armed forces for America.

As the Veterans parked their bikes as far as the eye could see, one by one they were thanked for their service for this country.

Among the hundreds of bikers was Road Captain David Klemme. Also known as “Papa Smurf,” Klemme serves as the route coordinator of the bike group Run for the Wall.

Klemme said he served in the Marine Core for 25 years, and now as a retired veteran he helps lead the 597 registered bikers across the country to Washington D.C. to celebrate Memorial Day.

“I just enjoy the community we feel at each place we stop along the way. Seeing the memorials and the appreciation people have for our service means a lot,” Klemme said.

While visiting the Veteran Memorial the bikers refueled on sandwiches and ice-cold water sponsored by the American Red Cross, Capital City Christian Church and the American Legion Post 7.

Sis Bickers of the American Legion has been volunteering at the veteran memorial biker rally for six years now.

“This is just a way to thank them for what they have done for our country. Without them we wouldn’t be here,” Bickers said.

A veteran and volunteer present at the rally was Frankfort’s own Garth Vinson. Vinson was drafted in 1971 for the Vietnam War and retired in 1992. Once a motorcyclist himself, Vinson was proud to see the age range expanding for the bike groups.

“There is on average, 22 suicides committed every day by soldiers who have returned home,” said Vinson, “about six or eight years ago they started making a conscious effort to reach young people, to remind them that they aren’t alone.”

Lt. Gov. Jenean Hampton was also present at the veteran rally where she expressed her deepest gratitude and her heartache for the veterans because of the appreciation that is being lost for their service and sacrifice that they make for this country.

“I have an appreciation for what our veterans do for this nation and I think it is being lost. So thank you for what you’ve done and your willingness to stand up for our nation,” Lt. Hampton said.

The veterans gathered together around the memorial to remember soldiers who are MIA and POW’s. As the color guard was presented, it was silent. A silence that reminded everyone to never forget those who fought for this country.