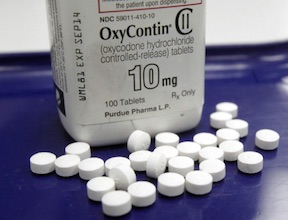 (FROM THE CHARLESTON GAZETTE) Over five years, the nation’s largest drug wholesalers flooded notorious “pill mill” pharmacies in West Virginia’s smallest towns and poorest counties with hundreds of thousands of painkillers, according to court records the companies had sought to keep secret for more than a year.

The prescription drug distributors shipped large quantities of oxycodone and hydrocodone tablets to small towns like War, Kermit, Oceana, Van and Crab Orchard, supplying mom-and-pop pharmacies that filled prescriptions from doctors, some of whom were later convicted of federal crimes.

Some examples: H.D. Smith Drug Wholesale Co. sold 39,000 pain pills over two days to two Mingo County “sham” pharmacies located within four blocks of one another, according to allegations in the court records. Another prescription drug distributor, Top Rx, shipped more than 300,000 tablets of hydrocodone — known better under brand names like Lortab and Vicodin — over four years to a McDowell County pharmacy in the town of War, population 808. That amounts to 350 hydrocodone pills per person in War.

“The distribution of vast amounts of narcotic medications to some of the smallest towns and unincorporated rural areas of our state should have set off more red flags than a school of sharks at a crowded beach,” said Delegate Don Perdue, D-Wayne. “In this case, perhaps the most unfortunate aspect was that the sharks controlled not only the distribution of the drugs, but the warning flags as well.”

Thompson’s ruling follows a Charleston Gazette-Mail motion to unseal a revised complaint that’s part of a state lawsuit. The complaint alleges the firms shipped an excessive number of pain pills to West Virginia between 2007 and 2012, helping to fuel the state’s ongoing prescription drug problem.

The drug companies repeated their request to keep the court records under wraps Monday morning. They’ve been fighting the release of the pain-pill shipment numbers since January 2015.

“Our position is, this is proprietary data,” said A.L. Emch, a Charleston lawyer, who represents AmerisourceBergen Drug Corp., one of the companies being sued by the state. “No good reason exists at this point to disclose that information.”

The judge disagreed, and two hours later he ordered the release of the court records.

Thompson redacted, or blacked out, pill shipment information for seven drug wholesalers that have reached settlement agreements with the state. Six of those companies agreed to settle with the state over the past two weeks — after the newspaper filed its motion to intervene.

The court records released Monday include pill shipment records supplied by the prescription drug wholesalers and the U.S. Drug Enforcement Administration to lawyers representing the state Attorney General’s Office, Department of Health and Human Resources, and the state Department of Military Affairs and Public Safety.

The documents show that over the five-year span: