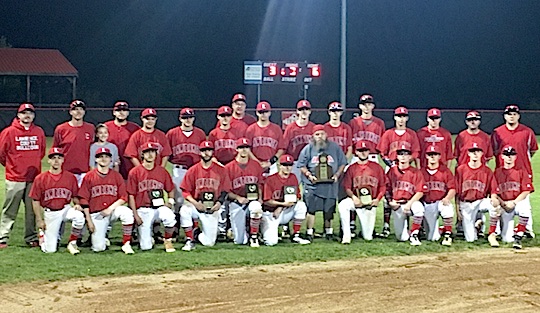 Pond Creek, Ky. —  Lawrence Co. took care of Pike Central on Tuesday night at Belfry 6-3 to capture another 60th district championship. The Dawgs will move on to the 15th Region tournament that will begin on Monday at Shelby Valley. The draw will be later this week.

Lawrence Co. ( 24-9 ) fell behind in the first inning as starter Austin Bailey was a little wild to start the game. Bailey got out of the one out bases loaded situation to only allow one run. The Dawgs bounced right back as Morgan Miller lead of the bottom of the first with a triple into the right center field gap and would score the first of four runs in the inning after Drake Barager singled sharply to score two more runs. Bailey settled down after the first and pitched shutout baseball for the next four innings before he gave way to CJ Fairchild who pitched the last two innings giving up two runs to pick up the save. Brock Turner doubled to score Zach Keesee to give the Dawgs some breathing room.

Pike Central dropped to 19-13 but will also advance to the 15th Region tournament. 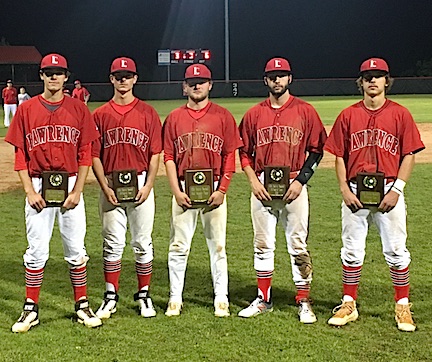 Lawrence Co. had five on the all district team which was voted on by coaches for the regular season.

“… We were on shaky ground, had a guy warming up in the bullpen in the top of the first that’s never a good sign. But to Austin Bailey’s credit he was able to control the damage to one run.” We answer when Morgan Miller rips a triple to set the tone he has been a spark plug for us all year and then Drake Barager, who had a huge tourney, caps the inning off with a 2 RBI hit.”  Bailey was good the next four innings and then we made the change to the 8th grader CJ Fairchild who we have confidence in and he closed it out.” Give credit to our defense they were solid all night and made a couple dandy plays, I hate to single out any of my guys or my 8 seniors, because they have given me a great portion of their teenage year but what Zach Keesee will always hold a special place in my heart, what he has done after a horrific injury just a few months ago and then learn a new position that he has never played was really amazing and the other coaches took notice of the year he has had and voted him district MVP which he really deserved”