Kentucky school officials are concerned about a proposal by Republicans in the U.S. House that would make it harder for schools to offer free meals to all students using federal money.

The House is considering changes to the 2010 Hunger-Free Kids Act, now in its second year, which allows schools who serve a high-poverty population to offer free meals to every student.

Instead of collecting individual applications for free or reduced-price meals, the Community Eligibility Provision uses data that illustrates how many students in a given school may be “food-vulnerable”: how many students live in households that receive government assistance, live in foster care, are homeless, and other similar criteria. 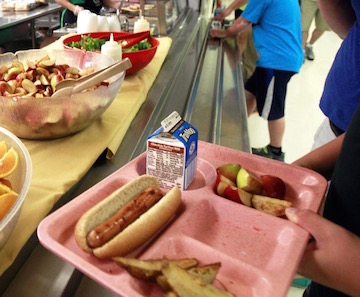 Under current CEP rules, schools with greater than 40 percent of students who qualify as food-vulnerable are eligible to offer free meals to all students. A bill approved May 18 by the House Education and Workforce Committee would raise the threshold to 60 percent, forcing schools between 40 and 59 percent range off the program.

“Proponents of community eligibility say it spares schools from paperwork and administrative burdens, and that it allows low-income children to eat free meals without the stigma or red tape of particpation in the free meal program, which is often a barrier for participation,” Evie Blad reports for Education Week. “But Republicans on the committee said the provision is wasteful, potentially allowing children from higher-income families access to free meals.”

The change could affect more than 350 Kentucky schools. Kentucky has 804 schools eligible to offer free meals under current CEP rules, according to the Center on Budget and Policy Priorities. Under the proposed bill, only 441 would qualify, according to the center.

Nick Brake, superintendent of Owensboro schools, told Keith Lawrence of The Messenger-Inquirer that he is hopeful that his district will be spared cuts.

“I have been working with Congressman (Brett) Guthrie’s office on this issue,” Brake said. “We are still looking at the overall numbers, but our district average is 63 percent, so it looks favorable that we will be able to continue to provide the benefit of this vital program in the future.”

Muhlenberg County Supt. Randy McCarty told Lawrence he thought his district would still qualify. “Once a district goes CEP, it stays in place for four years,” he said.

Hopkins County, which recently expanded its use of free meals to all public schools, faces uncertainty if the changes are passed.

“I have no idea if school districts will be grandfathered in, or how Congress will write everything, but I am afraid that if we don’t jump on this now, we may not get this opportunity again,” Michael Dodridge, food services director of Hopkins County schools, told Laura Buchanan of The Messenger in Madisonville. “I would hate to pass this up.”