Coal country rejects Clinton, the only candidate with a specific plan to help 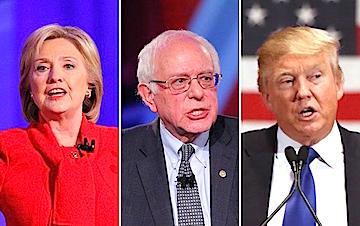 One irony of Kentucky’s presidential primary election was that the only candidate with a specific plan for helping Appalachian coal country transition to a 21st century economy was trounced in that part of the state.

Hillary Clinton won Kentucky’s Democratic primary Tuesday by the narrowest of margins, but lost the vast majority of coal-producing counties to Bernie Sanders.

Sanders shares Clinton’s realistic view about coal’s bleak future in the face of market forces and climate change. And he agrees with her that the nation owes a debt to miners and their communities.

But Sanders has offered nothing as detailed as Clinton’s $30 billion plan for revitalizing coal communities, which includes everything from safeguarding miners’ pensions to infrastructure investment and economic development help.

It reminds you of February 2015, when President Barack Obama proposed investing $1 billion of federal abandoned mine funds to rebuild Appalachia. The offer was all but ignored by Kentucky political leaders, who have spent years demonizing Obama’s concern for the environment as a “war on coal.”

Many Eastern Kentuckians’ preference for Sanders might be rooted in the perception that Clinton would be a continuation of Obama, whom they have been groomed to despise. Plus, Sanders’ anti-corporate, anti-establishment rhetoric appeals to a lot of people in this age of growing wealth inequality.

Most political observers expect Donald Trump, who won Kentucky’s GOP caucus in March, to carry the state in November, unless the Republican establishment finds a way to keep him from getting the nomination.

Trump plays especially well in coal country, because he tells people what they want to hear. It has always worked for Kentucky politicians; why not for him?

“We’re going to get those miners back to work,” Trump said recently in West Virginia, while posing for photographs wearing a miner’s helmet. “The miners of West Virginia and Pennsylvania … Ohio and all over are going to start to work again, believe me.”

Of course, Trump has no plan for accomplishing that. Just believe him.

Coal isn’t going away. It will continue to be a major energy source for decades, which makes it critical that the nation invest in more environmentally sensitive ways to mine and burn it.

But coal’s economic importance to Kentucky has been greatly diminished, and it will continue to shrink because of cheap natural gas, increasingly cheap renewable energy technology, concerns about climate change, and the effects of toxic air and water pollution on public health.

Coal employment in Kentucky has been falling for three decades, mostly because of mechanization. Still, mining has been one of the few good-paying jobs in many parts of the state. Lost mining jobs must be replaced with other opportunities.

But that is unlikely to happen until Kentucky leaders and their followers stop whining about inevitable change and start exploring creative ways to adapt to it.

One other thing to keep in mind: The “war on coal” crowd isn’t just miners and their neighbors in Appalachia. It is coal industry professionals in Central Kentucky — lawyers, accountants, engineers, bankers and executives. Their interests have far more to do with coal company profits than the economic or environmental future of mountain counties. When the money runs out, they will just move on.

The “war on coal” is real — as was the 19th century’s “war on firewood.” If Kentuckians don’t start planning for the future instead of yearning for a past that will never return, coal country will be left with little more than metaphorical axes and saws.