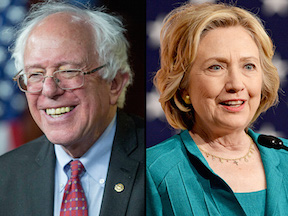 Hillary Clinton edged Bernie Sanders in a tight race in Kentucky’s Democratic presidential primary. With 99 percent of precincts reporting shortly before 9:30 p.m. EDT, Clinton led by about 2,500 votes.Clinton, a former senator and secretary of state, was trying to recapture both her momentum across the nation and the Clinton family magic in Kentucky that made Bill Clinton the last Democrat to win the state in a presidential race and gave Hillary Clinton a huge victory over Barack Obama in 2008.

Sanders was trying to continue chipping away at Clinton’s 767-delegate lead in the Democratic presidential race. After Tuesday, only six Democratic primary elections remain.The only thing that was certain is that neither candidate would win a big delegate advantage in the state since delegates are awarded in proportion to the vote they receive in each congressional district.Sanders won by large margins in the Eastern Kentucky coal fields while Clinton did best in urban areas. She has been helped by the African-American vote throughout the country.Kentucky Republicans chose Donald Trump as their nominee in a March 5 caucus.

In Lawrence County Sanders easily beat Clinton 659 to 444 with 111 voting uncommitted with only a 15.61% turnout.In the Democratic race, 55 delegates were up for grabs. The state’s Democrats also have five superdelegates, two of which have already pledged their support to Clinton. Two others have not said who they would vote for, and a fifth superdelegate has not been named.

The highest-ranking Democrat in the state Senate turned back a challenge Tuesday in one of the most acrimonious, expensive primaries in the state.

Sen. Ray Jones, a Pikeville attorney who is the Senate minority leader, easily defeated Glenn Martin Hammond for the 31st District nomination. 9,456 to 3,870 statewide. In Martin County Jones won by 227 to 107 in a very light turnout.

Hammond also practices law in Pikeville and was making his first run for public office.

Jones and Hammond each had tried to link the other to President Barack Obama, whose environmental policies many in the district blame for a sharp decline in the coal industry that had riddled the economy with job losses.

They had also thrown sharp elbows in other advertisements.

Hammond accused Jones of conspiring with a utility-management company that has been controversial. The company was managing Pike County’s water district when it received a large rate increase last year.

Jones hit back with an ad saying Hammond had been financially irresponsible, citing tax liens against the challenger and checks Hammond sent to pay his city occupational taxes that bounced.

No Republican filed for the general election.

The district is made up of Pike, Martin, Lawrence, Elliott and Morgan counties.