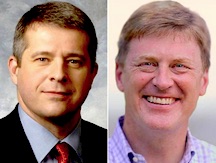 The campaign between two Democrats in the 31st District state Senate race in Eastern Kentucky has been so heated that even their supporters yelled at one another at a forum last month.

It’s been the most expensive state Senate primary as well, with the incumbent, Ray S. Jones, reporting receipts of $431,460 and $404,000 in spending as of early May.

His challenger, Glenn Martin Hammond, reported total contributions of $167,901 as of early May and had spent $80,125, leaving a substantial balance leading up to the May 17 election.

Jones, 46, has held the seat since being elected in 2000 and is the Senate minority leader. Hammond, 46, is making his first run for office.

Both are personal-injury lawyers in Pikeville.

Each has said the biggest problem in the district is a lack of jobs. Employment in the coal industry has plunged since 2012.

Many in the region blame President Barack Obama’s push for tougher rules to protect air quality for driving down the market for coal, though analysts say other factors, such as competition from cheap natural gas, also have played roles.

Jones and Hammond have tried to tie each other to the president, who is unpopular in Kentucky.

Hammond said in an advertisement that Jones is a liberal career politician who supported Obama for election twice. The ad also used a quote from Democratic presidential candidate Hillary Clinton about putting coal miners out of business.

“He’ll vote for Hillary,” Hammond said of Jones in his latest ad. “I won’t.”

Clinton did talk about putting miners out of work, but said later it was a misstatement and she meant market forces are causing coal’s decline. She earlier released a plan to help miners and coal regions.

Jones said it was an “outright lie” for Hammond to say Jones will vote for Clinton. Jones said he disagrees with Clinton on many things and has not said he will vote for her.

Jones said he has fought for the coal industry and has been endorsed by the United Mine Workers of America.

For his part, Jones put out an ad calling Hammond a “closet liberal” who had donated “big money” to Obama’s war on coal.

Federal records do not list contributions from Hammond to Obama. He gave $200 in 2012 to the Democratic National Committee, according to the records.

Hammond’s campaign manager, Kim Geveden, said Jones’ ad is intentionally misleading. Hammond’s contribution was not “big money” and had nothing to do with any regulatory pressure on coal, Geveden said.

Hammond has hit Jones for his ties to Utility Management Group, which has operated Pike County’s Mountain Water District for more than a decade and has been the subject of some controversy.

The state Public Service Commission said Mountain Water had gotten a $500,000 loan from UMG without PSC approval and had not studied whether it was beneficial to have the company run the district, which received a large rate increase last year.

Hammond said Jones and UMG executives had been “conspiring” for years, with UMG officials contributing to Jones’ campaigns and Jones lobbying at one point for the company to keep its contract.

Jones said there’s been no finding that UMG, which is owned by a close friend of his, has done anything wrong, and that there is nothing improper in his association with the company.

“In my 16 years in the General Assembly, I have maintained the highest ethical standards,” Jones said.

Jones hit back over the UMG ad with a spot featuring his wife, Dr. Paula Ashby-Jones, saying Hammond had faced tax liens and failed to meet his financial obligations.

After the campaign began, two checks Hammond sent the city for occupational taxes bounced, and on another occasion he paid the tax late. Hammond made good on the bills.

Hammond’s record of being “financially irresponsible” should disqualify him, Jones said.

Geveden said Hammond has struggled financially at times “like a lot of other people.”

Hammond has charged that Jones has not done enough to boost the district’s struggling economy.

“My opponent wants to focus on jobs after 16 years. It’s not been a concern for him,” Hammond said.

Jones responded that he has worked to improve the economy and quality of life in the district, saying he had gotten $2.2 billion over the years for new schools; water and sewer service; road improvements; and other projects.

Jones said he will continue supporting education and wants to see the state have a dedicated job-training program for laid-off miners.

While Hammond said the district needs a fresh face in Frankfort, Jones argues his experience and leadership post put him in a better position to help the district.

The district is made up of Pike, Martin, Lawrence, Elliott and Morgan counties.

No Republican filed to run for the seat.