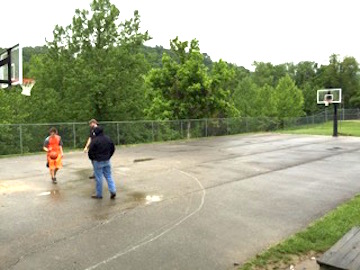 Work started earlier in the week as part of a project to revamp the entire park, which includes a total overhaul of the highly used basketball court, as part of a grant received by the city From the Appalachian Regional Commission.

The old goals, which had become a safety hazard, were removed early in the week and new concrete footing were poured. Volunteers then spent the rainy Saturday morning assembling and raising the new basketball goals. 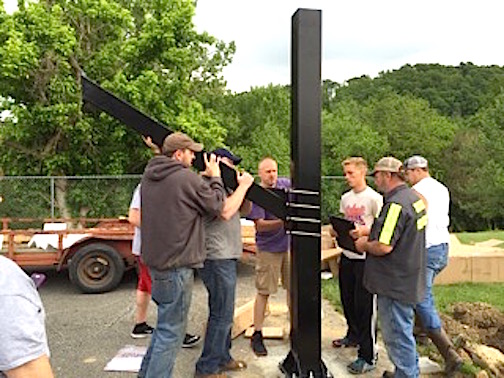 The court will also receive a coat of paint with lines, which it did not have previously.

The City has teamed with Matt Brown of Louisa, and his volunteer group called Rise Above, to sponsor several activities at the park and basketball court this summer.

Current plans include a series of 3 on 3 basketball tournaments, which Brown is planning on being a multi-community event, with participants coming from several surrounding Cities to play.

Also in the plans is a free basketball fundamentals clinic and a shooting clinic for children, which will incorporate “messages in good decision making, identity formation and how to avoid peer pressure”, Brown said.

Brown, a drug addiction counselor, is incorporating an anti-drug and drug prevention message around the entire program. 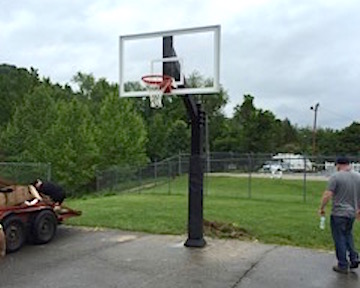 “We want this to be a safe and positive atmosphere for the city’s kids to come hang out and have additional recreational opportunities and with the drug abuse problem in the area, we felt it would be a good opportunity to use the activities to send an anti-drug message”, Mayor Harold Slone said.

“We are also hoping that it will be a step toward battling the areas problem with childhood obesity by providing opportunities to have an active and healthy lifestyle” Slone said.

More information as well as dates and times for all activities will be posted to the Louisa Hoops for Hope Facebook page.