WHY NOT GENDER NEUTRAL RESTROOMS? FOR ONE PERSON AT A TIME 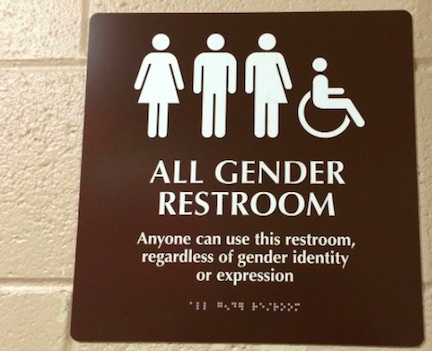 Like most of you I went through school dreading to use the restrooms at school because they were so nasty and smelled so bad. But everybody has to go somewhere and sometimes.

The instructions that came down from the White House this week be damned, parents won’t let their kids have a mixer in the bathroom — with the opposite or the opposite of sex. That’s all there is to it.

My thoughts are that this  issue is meant to be a smoke screen for something coming down that the powers that be don’t want any attention paid to. This gender equality law has been around a long time and until the Governor of North Carolina decided to make it a big deal, students just went where they belonged not knowing if they were peeing next to a homosexual or a transexual or not. They didn’t even think about it. I don’t see how we can ever know, especially if the person in the next stall is in the closet with their sexuality.

Last year the Supreme Court told us that people of the opposite sex should be able to legally wed and have all the tax and other government benefits allowed for natural born couples. I never agreed with that because I can’t see how the feds can tell if they are really homosexual or just pretending to be to get the benefits.

Now they tell us they should be able to go to the public restroom they identify with.

What was wrong with the way it was done before Monday morning? I never heard anyone complain in our area about it. They didn’t know if they were peeing next to a homosexual or not and didn’t even think about it. Now we have a big issue over who pees where and with whom when we can’t tell which is which. The folks who are homosexual and in the closet (most of them) wouldn’t use the LGBT restroom anyway.

Just goes to show you that the government can always come up with a good smokescreen when they want to. I just wonder what the REAL issue is they are trying to hide. Don’t you?

My solution to the restroom dilemma is to have private restrooms for everybody and each student or customer can wait in line to use them one at a time. Maybe they could keep them cleaner that way, anyway.