Ranier Racing Museum set to open at at the Mountain Arts Center. 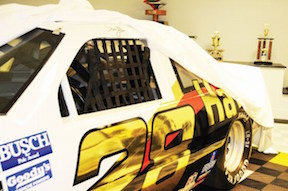 PRESTONSBURG — Prestonsburg Tourism is one car closer to opening the Ranier Racing Museum at the Mountain Arts Center.

A 1988  race car driven and autographed by Davey Allison of Ranier Racing was delivered to the MAC last week and installed inside the museum, which is under construction in the MAC’s lobby. Officials had to  larger doors at the back of the MAC to get the car inside the facility.

Prestonsburg Tourism  Misha Curnutte reports the car is on loan until September from the International Motorsports Hall of Fame, where it was previously displayed in Talladega.

Officials expect to exhibit a series of Ranier Racing cars inside the museum, along with trophies and other types of Ranier Racing memorabilia. The racing team, led by family patriarch, Harry Ranier, a Prestonsburg native, fielded cars in the NASCAR Winston Cup series for Allison, Lennie Pond, Buddy Baker, Bobby Allison and Cale Yarborough and other .

Pearson said a grand opening will be announced at a later date. He hopes to open the museum to the public in early June.