BILL CLINTON PLEADS WITH CROWD TO THINK ABOUT FUTURE GENERATIONS

Bill Clinton met by cheers, miners’ boos as he tries to keep the No. 3 coal state in his wife’s column… 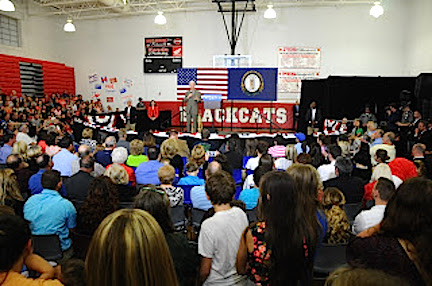 Former President Bill Clinton was met by cheers and boos in Eastern Kentucky coal country on Thursday while campaigning for his wife ahead of Tuesday’s Kentucky primary, Mary Meadows reports for the Floyd County Chronicle. Hillary Clinton scored overwhelming victories in the county and the state in the 2008 primary against Barack Obama, but is at risk of losing the state to Vermont Sen. Bernie Sanders because of what has been dubbed as “Obama’s war on coal,” Meadows writes. While cheaper natural gas and difficult mining geology in Central Appalachia are the main reasons for the region’s decline in coal, many in Eastern Kentucky blame Obama, and Democrats who support him, for the industry’s downfall.

Clinton took booing miners in stride, telling them, in an apparent allusion to Donald Trump: “I’m not like a lot of people. You know, it doesn’t bother me to have protesters at rallies. I’m glad they come, because I think one of the biggest problems in America today is we seem to be less prejudiced about everything, except we don’t want to be around anybody that disagrees with us. Have you noticed that? And I think that’s a mistake. . . . You don’t have to agree with everything … I believe, but I’m going to tell you we’re not going to get anywhere screaming at each other. … What really matters is whether our children have a brighter future and whether we’ll be together or be torn apart.”

Clinton “talked about that economic revitalization plan supported by his wife and incentives that encouraged companies to create more jobs,” Meadows writes. “He talked about the need to diversify the economy and pledged that if his wife is elected, he would volunteer to help the region, noting he grew up on a farm with no vehicle or toilet and stating that he understands what Eastern Kentucky is going through because he was governor of Arkansas when it faced tough economic times. He called for people to come together to work to find solutions.”

Joe Gerth of The Courier-Journal reports that Clinton “talked about students at Morehead State University who are working on nano-technology satellites that are going up to the International Space Station. ‘Don’t tell me we can’t bring different kinds of jobs to Eastern Kentucky,’ he said. ‘And don’t tell me somebody over a certain age can’t learn this stuff. I’m pleading with you to think about it. Think about your life, your children’s lives, your grandchildren’s lives,’ Clinton said.”

Growing up in Louisa – The Adams Family!