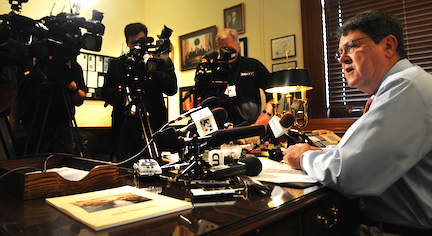 Stumbo contends Bevin and his staff did not follow the process outlined in the Kentucky Constitution for filing ve­toes — delivering the vetoes improper­ly to the House clerk rather than the Secretary of State’s Office as well as other procedural mistakes that make the vetoes void.

If Kentucky courts ultimately rule for Stumbo, the ruling would restore state funding for the many vetoed items large and small including the House’s priority  for community college students, $420,000 per year for the Louisville Wa­terfront Development Corp., $7.5 mil­lion for indigent  in Jeffer­son County and expanded preschool eli­gibility statewide. Stumbo, a Prestonsburg Democrat, said he is not raising mere technicali­ties and is not engaging in a political at­tack against the Republican governor. He said that as House speaker he has a constitutional duty to have these mat­ters addressed by the court.

While “hardline, far-right Republicans” may not believe that, he said, “If you’re an average Kentuckian you understand I took an oath to uphold the constitution.”

Jessica Ditto, spokeswoman for Bevin, said in a statement that the vetoes conform with the constitution and are . Ditto called Stumbo’s action “another petty political lawsuit” similar to Attorney General Andy Beshear’s suit last month challenging Bevin’s authority to cut university funding in the current state budget. “While we’re working to fix the financial foundation of the Commonwealth, they are intent on thwarting progress by filing frivolous lawsuits,” Ditto said of Stumbo and Beshear.

The suit was filed in Franklin  and it deals with vetoes Bevin issued that struck all, or parts of, the state budget bill and five other House bills.

Stumbo said that later that day Bevin’s office requested the vetoes be returned because of the incorrect delivery, but the House clerk had already left for the day with Stumbo’s permission.

But Ditto said Bevin’s office asked that the vetoes be returned “because the House clerk was refusing to deliver them to (the Secretary of State’s Office) after saying she would. They were literally locked up in the speaker’s office. She told us she would deliver them after she ran an errand.”

One veto that Stumbo said he’s not challenging is Senate Bill 245 — the controversial bill that would have complied with a federal mandate that Kentucky issue driver’s licenses that meet federal security . Stumbo said that original veto and bill were properly delivered by Bevin’s staff.

Stumbo said other legal problems with the vetoes include: five of the more than 30 parts of the budget bill that Bevin vetoed do not include a required message explaining why he deleted them; the governor’s vetoes of items in the highway construction bill are invalid because it is not an appropriations bill and — as such — the governor cannot veto parts of it and must either veto either all or none of it.

The lawsuit also says the vetoes were “facially defective” because they were not signed by Bevin on April 27 when he “was not present in the Commonwealth or the country on that date.” Bevin was on a state trade mission in Europe when the vetoes were issued, but his General Counsel insists the vetoes were properly signed by autopen on Bevin’s authority.

And the lawsuit challenges one nonbudget issue: the validity of Senate Bill 296, creating a Governor’s School for Entrepreneurs. Stumbo said that bill cannot be law because he never signed it. He said the bill was not delivered to him for his signature until after the General Assembly adjourned April 15.