EPA chief: Coal communities in danger of being left behind, with or without clean power regulations 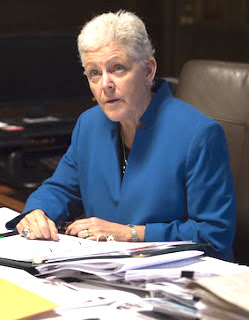 Environmental Protection Agency chief Gina McCarthy (Getty Images photo) said coal-dependent communities are “at risk of being ‘left behind’ as the country moves away from coal power,” Timothy Cama reports for The Hill.

McCarthy, who was participating in a discussion on Friday with science educator Bill Nye, also said that the move away from coal, which she said would happen even without President Obama’s clean power regulations, “is causing a net increase in jobs.” She told Nye, “On the whole, what’s happened is jobs continue to grow. What happens, though, is some communities may get left behind.”

Nye asked McCarthy about the decline of coal in West Virginia and Kentucky, where presidential candidates have been stumping in advance of Tuesday’s primary in the Mountain State and the May 17 primary in the Bluegrass State, Cama writes.

McCarthy said “recognizing the harm to coal communities does not mean that the country should abandon efforts to cut greenhouse gas emissions or other harmful effects from coal.” She told Nye, “You don’t change the entire dynamics of the economics for those communities or deny they exist. You invest in those communities so they continue to have opportunities moving forward.”

McCarthy said Obama’s administration will “invest in coal country and help communities adjust to new economic development and educational opportunities, among other measures,” Cama writes. “Lawmakers from both parties, along with the White House, have backed a similar proposal they call the Reclaim Act, which would use abandoned mine fees for coal country transitions. The Supreme Court put the administration’s main rule threatening the coal industry, the Clean Power Plan, on hold in February. Obama pledged last year that the U.S. would cut its greenhouse gas emissions 26 percent to 28 percent by 2025, when compared with 2005 levels.”

McCarthy told Nye, “We have already taken considerable steps. We have planned ahead. And for crying out loud, what we have is a pause in the Clean Power Plan. If anybody knows anything about EPA in writing rules, we rock at it, we do them legally, we do them on the basis of sound science. And while there is a pause, there’s no pause in the action in the United States towards renewable energy and energy efficiency. We are going in exactly the direction our rule demanded, and we’re doing it because the markets demand it. We could not be in better shape than we are today.”