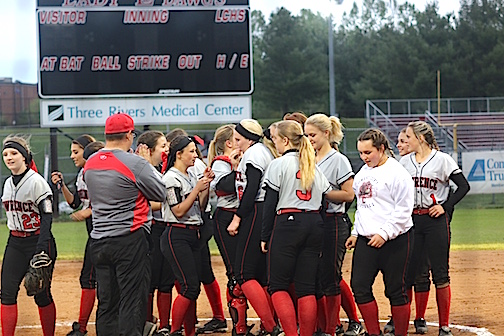 Louisa, Ky. —  For the first time in the last eleven meetings the Lady Dawgs came away with a 4-2 victory over 15th region rival Johnson Central in front of a big crowd on a chilly Thursday night at the LCHS softball complex.

In a game between two of the top three teams in the 15th region LC finally got over the hump after being so close in many of those previous meetings. It was Lawrence Co’s ( 16-9 ) first win over Johnson Central ( 18-8 ) since a 2-1 victory in 8 innings in 2010. 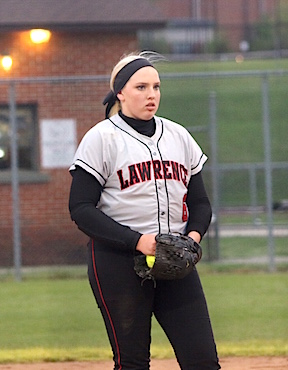 Trailing 1-0 in the bottom of the 6th the Bulldogs came alive to plate four runs with the top of the lineup coming through in a big way. McKenzie Giompalo, Addy Frazier, Bowen, and Ally Marcum all contributed in the decisive inning. Third Baseman Abby Fletcher and Catcher Natalie Rice both played well on the defensive side.

” …Important win, good for our kids. Had some seniors that had never beat Johnson Central and for them to get the confidence, we have been preaching it all year for them that we are a top three team in the region. Played fairly clean tonight and got a key hit and good defensive play as well. Ciana Bowen did a good job keeping them off balance with her change up, had them out on their front foot all game and her rise ball was effective.” Happy for all our kids especially the four seniors so happy for them to get victory against Johnson Central it should spring board us for the rest of the season.”

The Lady Dawgs will be back in action tonight as they travel to Hazard to face Harlan Co.

On Monday at home they face Magoffin Co.

On Tuesday night it will be home vs Pikeville when the four seniors will be recognized.