KENTUCKY GOVERNOR ‘NOT READY TO BACK TRUMP’

Matt Bevin refuses to endorse Donald Trump, but says he ‘will not vote for a Democrat’ 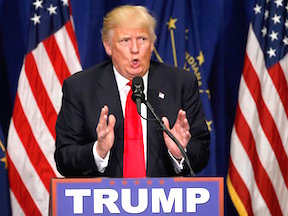 Kentucky Gov. Matt Bevin said Thursday that he will remain silent on his preference for president until Republicans  a nominee at their national convention in Cleveland.

Even though Donald Trump cleared the Republican presidential field after his victory Tuesday in Indiana and became the presumptive GOP nominee, Bevin, a Republican, said Thursday that it would be a mistake to endorse anyone yet.

“At this point, weighing in on who I am going to vote for, I think, is a mistake for me or any other person,” he said. “The reality is let the thing unfold. Let a nominee come forward from each respective party.”

Bevin acknowledged that Trump is the presumptive GOP nominee, but he said he has “never been nominated.”

He also said “there is no way” he could support Hillary Clinton or Bernie Sanders, the Democratic candidates for president.

Asked whether he would vote for a third-party candidate, Bevin said he wouldn’t  in hypothetical .

The governor was succinct when asked whether he had any interest in running for vice president this year.

“No. I’m interested in being the governor of Kentucky,” he said.

The Democratic Governors Association launched a new  Thursday naming Bevin a member of “The Silent Nine,” a reference to Republican governors who have refused to say whether they would support Trump on the ballot in November.

“Matt Bevin is  on as the Republican Party transforms into the party of Donald Trump,” said Jared Leopold, the association’s communications director.

“With Trump at the top of the ticket, Republican governors have nowhere left to ,” he said. “It’s time for Gov. Bevin and the rest of ‘The Silent Nine’ to declare whether they will support the presumptive Republican nominee.”