HOW WILL TRUMP BACK UP HIS PROMISES ABOUT COAL? 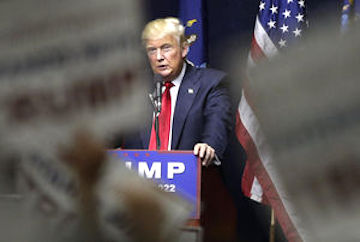 Republican presidential candidate Donald Trump has been hitting the campaign trail in Appalachia, telling coal miners about his plans to bring back lost coal jobs, reports The Associated Press.

“Trump, however, has yet to explain exactly how he will revitalize Appalachia’s coal industry. To pull it off, he will have to overcome market forces and a push for cleaner fuels that have pummeled coal.”

Trump said: “We’re going to get those miners back to work … the miners of West Virginia and Pennsylvania, which was so great to me last week, Ohio and all over are going to start to work again, believe me. They are going to be proud again to be miners.” (AP photo bu Julie Jacobson)

It’s not that simple, reports AP, telling some truths The Rural Blog has published for years.

While Republicans blame President Obama’s Clean Power Plan for coal’s downfall, cheaper natural gas has been a major player. Another problem in Appalachia is that “after decades of heavy production, there is less of it to be mined. Wyoming, with rich reserves of low-sulfur coal near the surface, is the largest coal-producing-state and has the most coal still in the ground at producing mines. According to the U.S. Energy Information Administration, Wyoming has three times as much recoverable reserves at producing mines as West Virginia and about twice as much as West Virginia, Pennsylvania and Ohio combined.”

AP reports: “Clean coal covers a range of technologies, some already in use, to reduce pollution. Many types of emissions from coal-fired plants have been reduced, but the capturing and storing of carbon dioxide, the emission that scientists say is most responsible for climate change, has been harder to accomplish on a significant scale. A model carbon-capture plant being built in Mississippi has encountered repeated delays and huge cost overruns that will make it one of the most expensive power plants ever built. The coal industry complains that carbon capture has not received the government incentives showered on renewable energy.” (Read more)

FDA to ban sale of e-cigarettes to anyone under 18