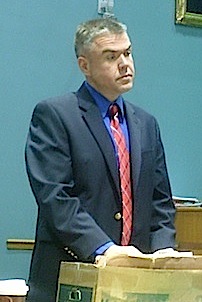 LOUISA, KY. — A controversial case involving a local bank vice president possession of child porography that was overturned on appeal by the state court of Appeals last month, is in limbo at this time.

A spokesperson in Kentucky Attorney General Andy Beshear’s office said yesterday that the case has been remanded back to the attorney of record, Anna Melvin’s office and the matter of a retrial is up to that office.

But long time Assistant Commonwealth Attorney Tony Skeens , said today that the decision is not that simple.

He said Circuit Judge John D. Preston, who sentenced Purdom, then a VP at Louisa Community Bank, to 15 years in prison on five counts of possession of child pornography in December 2014, granted a $15,000 full cash appeals bond In June of 2015 allowing Purdom to remain free pending his appeal.

Skeens said Attorney General assistant Katherine Reed told him that her office is considering whether to take the appeal, which was granted in a 2-1 decision April 22, 2016 on a technicality, to the Supreme Court for adjudication.