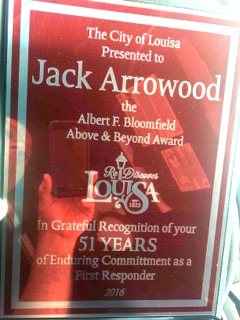 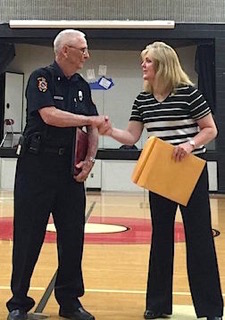 Opening day of the annual Louisa Fire School was a chance for Local and State officials to Honor Mr. Jack Arrowood for his half century of dedication to volunteer fire fighting and Chief Eddie Preston for his service and bravery in a recent fire.

Mayor Harold Slone, State Representative Jill York and Senator Ray Jones were attendance for the opening, where Mayor Slone presented Arrowood with the city’s first ever, Albert F. Bloomfield Above & Beyond award.

This award was created in Honor of former Louisa resident Albert Bloomfield, who tragically passed away in 2012.

“Albert was always volunteering or looking for ways to help others, always with little or no recognition, so we created this award in his name to honor individuals who go the extra mile to give back to their community”, said Slone. 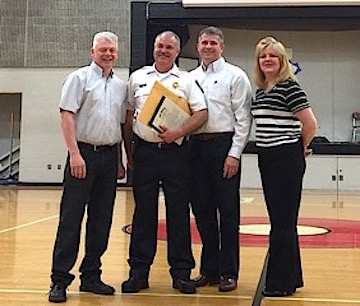 LVFD fire chief, Eddie Preston was also honored for his bravery in a recent fire rescue where he was responsible for saving a burn victim after a house explosion in downtown Louisa.

Representative Jill York and Senator Ray Jones presented the men with Citations from the State Senate for their service and made Arrowood a Kentucky Admiral and Preston a Kentucky Colonel.

The 2016 Louisa Fire School was had its highest attendance ever, with over 280 attendees from several different states.