Hillary will launch ‘Breaking Down Barriers” tour in Ky., W.Va. 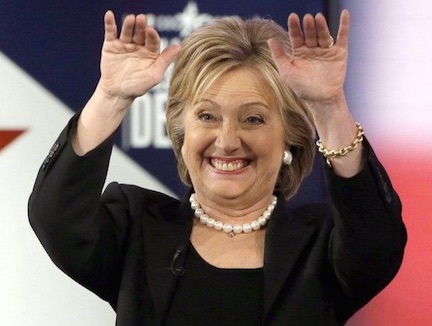 CHARLESTON, W.Va. — Hillary Clinton will visit West Virginia and Kentucky next week according to a press release from her campaign Friday.

Clinton will launch her “Breaking Down Barriers” Tour, according to the news release. She is far ahead of Democrat opponent Bernie Sanders in the 2016 Primary election vote totals and delegate counts and is also leading most polls over potential GOP opponent Donald Trump in her bid to become the first female president of the United States.

“I want you to keep imagining a tomorrow where instead of building walls, we are breaking down barriers. We are making it more likely that Americans will be part of a prosperous, inclusive, decent society,” Clinton said.

According to the , Clinton will meet with voters, hear their stories, and how she will fight to raise incomes and expand opportunities for them and their families as president

and times for the have not been released.

The survey of 1,680 registered voters, 635 of whom identified as Democrats, was conducted between April 9 and April 13. Among all Democrats and Democratic-leaning independent voters, Bernie Sanders leads Hillary Clinton by a 47-42 margin, with 11 percent of respondents saying they wouldn’t vote for either candidate. Sanders beats Clinton by a narrow margin of 49-48 among registered Democrats, and he demolishes Clinton by 16 points among self-identified independents. The poll’s margin of error is 2.7 percent.

Among all respondents, 36 percent identify as Democrats, 28 percent affiliate with the Republican Party, and 12 percent listed themselves as independents, with 9 percent leaning toward Democrats, 5 percent toward Republican, and 7 percent favoring a third party. Finally, only 2 percent of those surveyed said they were unsure of their party affiliation.

(From The Rural Blog Monday)

Democratic presidential candidate Hillary Clinton is hitting Central Appalachia today and tomorrow, “moving to strengthen what has been tepid support for the former secretary of state in coal country as the general election comes into focus,” Colleen McCain Nelson and Laura Meckler report for The Wall Street Journal. “During stops in Kentucky, West Virginia and Ohio, Clinton will focus on addressing economic disaffection, and she will make direct appeals to the rural and working-class white voters she has struggled to win over during the primary campaign.” The West Virginia primary is May 10 and Kentucky May 17. Ohio already held its primary, but will be a coveted state in November.

“With her nearly insurmountable advantage in delegates and a clear path to becoming the Democratic nominee, Clinton now can work on honing her message and building support among key voter blocs,” Nelson and Meckler write. “In Appalachia, the former secretary of state’s challenge will be to connect with white, working-class voters. Clinton scored resounding victories in Kentucky and West Virginia in 2008. But eight years later, she is marching toward the nomination with a decidedly different coalition, one that has been powered by minority voters, as well as urban and suburban professionals.”

“While Clinton’s support among rural and working-class white voters has eroded, [Donald]Trump has gained traction in largely white and slow-to-diversify areas,” Nelson and Meckler write. “The businessman’s success in attracting working-class white voters who are frustrated by the country’s shifting economics could prove a challenge for Clinton in areas such as Appalachia. Clinton, though, arrives in coal country with some explaining to do after appearing to blithely predict that coal jobs would be lost under her presidency.”

“In March, as Clinton spoke about how she hoped to spur economic activity in areas hurt by the decline of coal, she said her plans were needed ‘because we’re going to put a lot of coal miners and coal companies out of business,'” Nelson and Meckler write. “Her next sentence was, ‘And we’re going to make it clear that we don’t want to forget those people.’ But Republicans—and some Democrats—pounced on her remarks as insensitive to people affected by clean-energy policies.”

Derby Week is special to all of Kentucky