Bevin to promote Kentucky’s manufacturing advantages while in Europe

Bevin to promote Kentucky’s  advantages while in Europe 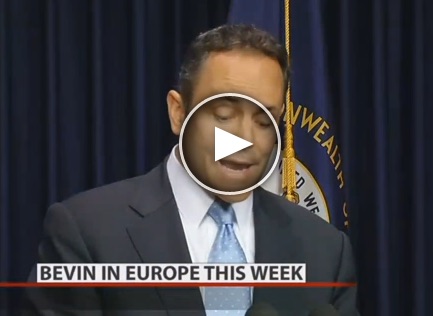 FRANKFORT – Gov. Matt Bevin will attend the Hannover Messe Fair in Hannover, Germany this week as part of a five-day trip through Europe to strengthen existing ties and build new relationships with business leaders.

At Hannover Messe, Bevin and other state officials will meet on Tuesday with companies that have Kentucky facilities, as well as prospective businesses, before traveling in Germany, France and Belgium to meet with executives throughout the rest of the week.

“This trip provides an incredible opportunity to sell the benefits of locating in Kentucky to a number of the world’s premier ,” Bevin said in a statement. “Kentucky stands out globally as an exceptional  for manufacturing. Our delegation’s mission is to actively recruit international companies and showcase why they should choose the Commonwealth for their next major project. We enjoy a strong economic relationship with European companies – they currently own and operate 180 facilities in the state and employ nearly 29,000 Kentuckians. We intend to build on that existing strength.”

Hannover Messe, taking place April 25-29, is the world’s largest industrial fair with approximately 6,500 exhibitors and more than 200,000 visitors annually from more than 70 countries. The event began in 1947 and covers all areas of industrial technology. This year’s themes include, digital factory, energy, research and technology and industrial supply. Nearly 1,300 speakers from throughout the world will discuss the future of industry on a global scale.

Several organizations representing the state will take part in this year’s event, including the Kentucky Innovation Network, KentuckyUnited and the Cabinet for Economic Development.

“There is no better way than speaking in person with industry executives at Hannover Messe and during our Europe trip, to demonstrate our state’s commitment to providing first-class service to existing and potential corporate partners,” said Erik Dunnigan, the Cabinet’s acting . “This trip takes abroad our messages about Kentucky’s vibrant economy, advanced manufacturing capabilities and location advantages that rank second to none.”

I LOVE TO GO BACK THERE, EVERY NOW AND THEN...