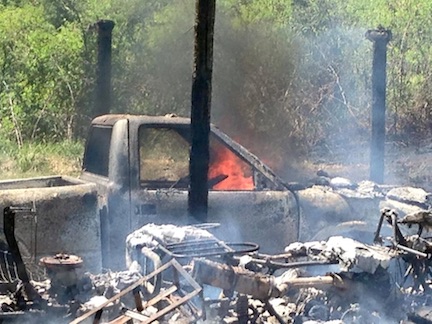 It has been a really bad month for fires in Lawrence County, with over three dozen fires of various kinds being responded to by the several different fire department agencies in around the county, with another blaze reported late Sunday morning, which also resulted in a injury. 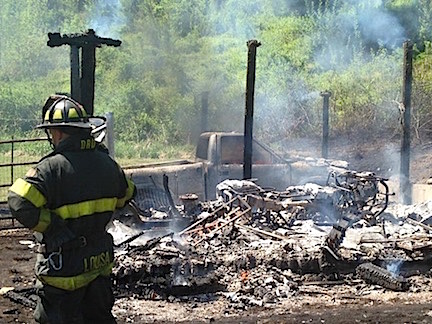 Just after 12 P.M. Sunday April 24, Lawrence County E-911 received a phone call in regards to a reported structure fire on 1500 Blaine Creek Road,  a few miles outside of Louisa.

The Fallsburg Fire Department was immediately dispatched to the scene, where they upon their arrival discovered a structure, identified as a full-sized functioning garage outbuilding, engulfed in flames leading the Fallsburg fire crew to request a mutual-aid assistance call for the City of Louisa Fire Department.

The Fallsburg Fire Department also then placed a call for Netcare Ambulance Lawrence County, as they quickly discovered the male owner of the building had suffered burn injuries while trying to dowse the blaze with a garden hose. Louisa Fire units also placed a call for Air Evac Lifeteam 116 helicopter ambulance out of Inez, Kentucky for a possible medical evacuation. 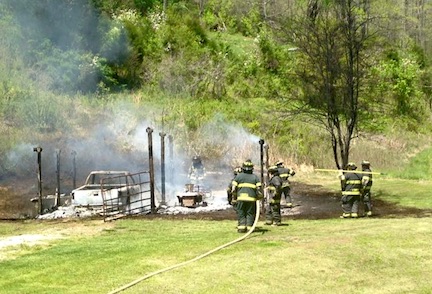 The injured man, identified by his neighbors on social media as Lester Ward, received treatment by emergency personnel for significant burns on his arms, however medics cancelled the air medical ambulance call, as Air Evac Lifeteam 116 was flying in the vicinity on standby mode.

The cause of the garage building fire is unknown at this time.