K-MART IN PAINTSVILLE TO CLOSE 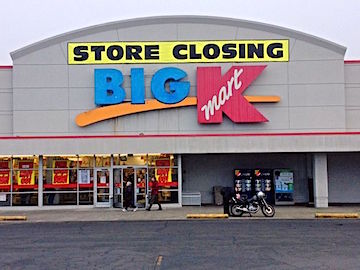 Kmart of Paintsville is one of the 78 Kmart and Sears stores closing this summer.

In February, Sears Holdings announced plans to close 68 Kmart stores and 10 Sears stores, although the  weren’t announced then.

They were announced Thursday by the parent company.

The Paintsville Kmart is one of five stores in Kentucky on the list. Two Louisville stores and one each in Elizabethtown and Maysville also will be shut down. Two of the 68 Kmart stores will close in Septem­ber. Both locations are out of state.

In February, Sears Holdings cited the 78 stores as unprofitable.

According to a news release by Sears Hol­dings, eligible associates impacted by  will receive severance and will have the opportunity to  at area Kmart or Sears stores.