FRANKFORT – Senate Democratic Floor Leader Ray S. Jones II, D-Pikeville, has spent a great deal of the 2016 session advocating that all coal severance revenue should be returned to the coal-producing counties. Though time appeared to be running out, Jones was successful during negotiations with the budget conference committee that lasted until early this morning to get $45 million of the coal severance funds returned to the coal-producing counties. 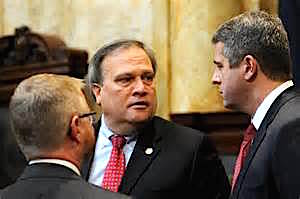 Jones represents Elliott, Lawrence, Martin, Morgan and Pike counties, all coal-producing counties. Many times this session, he has talked at length on the devastating effects the reduction in coal production is having on these communities and others in eastern Kentucky.

“With the rapid decline in severance tax, it is more important than ever that we ensure that coal severance tax dollars are returned in a productive way to the coal producing counties to help create jobs, boost the economy and educate our students,” Jones said.

The budget conference committee added $4 million over the biennium from lottery proceeds for need-based scholarships and an additional $6 million from coal severance funds to create a total of $14 million available for college scholarships for students from coal counties.

“As I have said before, this is not a democrat or republican issue.  This is about jobs, education and economic development,” Jones added.  “I am pleased that the rest of the budget conference committee recognized the importance of reinvesting in our coal counties.”

Jones has seized upon every opportunity this session to push through legislation to assist the coal-producing counties. He was even successful in helping pass House Bill 423 that included language to phase in over four years the distribution of coal severance tax revenues to allow 100 percent of those receipts to be distributed to coal-producing counties. The bill passed the Senate and House and was delivered to the governor on March 28. On April 8, Governor Bevin vetoed House Bill 423.

“It is unfortunate the governor vetoed House Bill 423, but that will not stop me from continuing to fight for our coal-producing counties and our coal mining families,” said Jones, the grandson of a coal miner. “This money is too important to our region and I will continue my efforts to bring it home.”

GAMECOCKS GETTING ABUSED IN FORT GAY